One of hip hop hottest properties, ‘Trap Lord’ A$AP FERG has declared he will be hitting the road this April – May for a powerhouse headline tour of Australia and New Zealand, including previously announced appearances at Groovin the Moo.

Heading to coastal capitals Melbourne, Sydney, Perth and Brisbane – plus stops in Wellington and Auckland – tickets for all shows will go on sale at 12 Midday on Tuesday February 17.

Whether it be Ferg’s energetic and gritty onstage performances, his fierce and feverish recordings, launching clothing and jewelry lines or attending art school, he has constantly bobbed and weaved, rising to the top of the hip hop world.

Friends since high school, A$AP Rocky pushed Ferg to get behind the mic as much as possible, joining Harlem’s very own A$AP Mob collective, rocking sold-out tours and teaming up for viral hits ‘Get High’, ‘Kissing Pink’, and explosive ‘Ghetto Symphony’ from Rocky’s 2013 chart-topping major label debut, LONG.LIVE.A$AP.

Stepping into the solo spotlight in 2012, Ferg released his debut studio album for A$AP Worldwide/Polo Grounds Music/RCA the following year – Trap Lord – laying down his hypnotic hood decree over the course of thirteen viscera, vibrant and visionary tracks. The album soared into Billboard chart’s top ten and was named one of the best hip-hop albums of 2014 by Spin Magazine.

He was formally recognised in 2013 as one of rap’s breakout players when he won BET’s Rookie of the Year award.

“Trapping means hustling,” Ferg explains. “It doesn’t matter what I’m working on… I want to perfect everything I do. Success is the only option. They call me ‘Trap Lord’ because my hustle game is impeccable”.

THE POWERSTATION, AUCKLAND – THURSDAY MAY 7 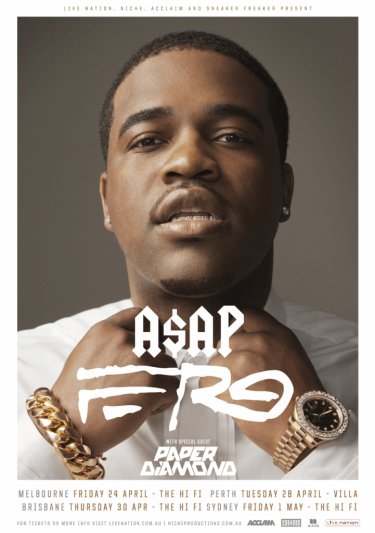