Returning to Australian shores for the first time in three years, American rapper ACTION BRONSON announces a run of headline shows next March in celebration of Mr. Wonderful, his sophomore studio album.

Born in Flushing, Queens, to an Albanian father and a Jewish mother, Action Bronson is an amalgam of many distinct parts. Initially an accomplished chef by trade, Bronson cut his teeth in sweltering New York City kitchens before stepping headlong into the world of hip-hop – entering the scene in the autumn of 2011 with Dr. Lecter, his full-length debut.

Debuting at number 7 on the US Billboard 200, the album artfully expands Bronson’s universe – pairing graphic street vignettes and references to his culinary loves with a production style drenched with tongue-in-cheek grandeur. Celebrated by the faithful and unfamiliar alike, Mr. Wonderful is an exquisite portrait of who Action Bronson is in 2015: an artist at the top of his game. 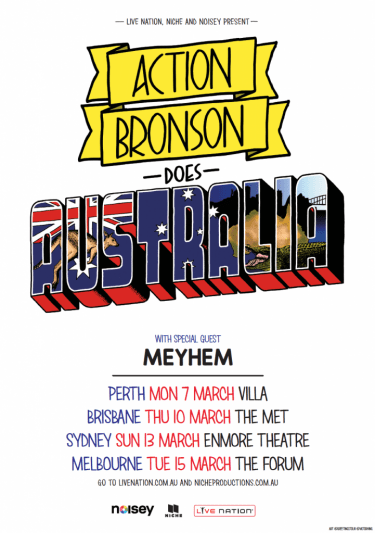