Niche is excited to announce Californian Anderson .Paak, along with his band The Free Nationals, have added an exclusive Melbourne show in addition to their Sydney performance at One Day Only.

Making his way into the now explosive Los Angeles music scene as a drummer/producer/vocalist /singer/songwriter, Anderson .Paak & The Free Nationals delivers a finite process in remaking alternative rock classics from beloved bands into compelling, funkier versions by extracting every bit of soul, jazz, hip-hop, electronic funk, and r&b from these great tunes- simultaneous paying homage to some of his all-time favourite songs and bands.

After his debut release ‘O.B.E. Vol.1’ in 2012, .Paak produced and recorded Cover Art, an all-covers EP in 2013 inspired by the white artists of the 1950s who achieved commercial success by remaking songs written by black Blues and R&B singers while hardly ever compensating the original artists. Cover Art reversed the process and transformed folk and rock classics from white musicians into a mould of Soul, Jazz, Hip Hop, and R&B.Most recently .Paak performed on 6 songs on Dr. Dre’s 2015 album Compton, following the 2014 release of his acclaimed debut album ‘Venice’.

Joining .Paak will be Sydney’s Joyride. Standing at around 9 foot tall and 3 feet wide, Joyride might be the biggest personality behind the turntables, a loveable giant that monsters the dance floor having played sets at Splendour In The Grass , Good Vibrations, Field Day, Peats Ridge Festival, Secret Garden, Parklife and Come Together, Joyride is also the touring DJ for rising hip hop group Spit Syndicate. If you don’t know Joyride’s name already, you will soon! 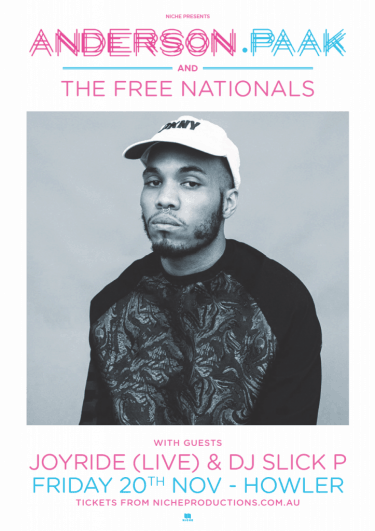