Already a standout on the Laneway Festival lineup, Live Nation and Triple J are excited to announce ANDERSON .PAAK & THE FREE NATIONALS are playing two very small and very sweaty shows this February.

This will be the first and last time Australian audiences will be able to catch the rising superstar in an intimate setting.

Singer, rapper, and producer Anderson Paak’s big break came courtesy of six songs on Dr. Dre’s 2015 album, Compton. Up until then he’d released a bunch of music including his debut album under the moniker Breezy Lovejoy.

The first Anderson release arrived in 2013 as an all-covers EP Cover Art before issuing full album Venice a year later. By 2015 he was a one-man hype machine after featuring on Dr. Dre’s Compton album. His latest release Malibu dropped in early 2016 and he’s featured on killer collaborations with Kaytranada (‘Glowed Up’) and Snakehips (‘Money On Me’).

Don’t miss the chance to say you were there. 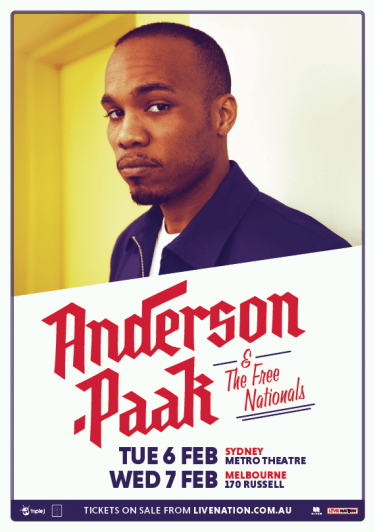