It is with great excitement that we are able to announce that the much anticipated visit to Australia and NZ of ANGEL OLSEN on the 2015 Laneway Festival tour will also include the opportunity to see her perform with her band at intimate headline club dates in Melbourne and Sydney.

These shows at Howler in Melbourne and Oxford Art Factory in Sydney will allow fans to feel the full effect of Missouri-born singer’s personal, powerful and spellbinding performances which will include songs from her recently released and outstanding second album BURN YOUR FIRE FOR NO WITNESS

“Olsen’s voice is enchanting; it sounds like the result of a spell that called for Leonard Cohen’s blood, Buffy Sainte-Marie’s larynx, and a still-operational old-timey microphone emblazoned with radio call letters. Her songs are powered by a strange, anarchic electricity, always flickering on the edge of blowing out. By the laws of the unique universe she creates on her records, Wanting, Waiting, and (probably the most popular pastime in her songs) Thinking are not passive stances but active ways of being in the world; unruly emotion is a virtue.” PITCHFORK 8.3 Best New Music 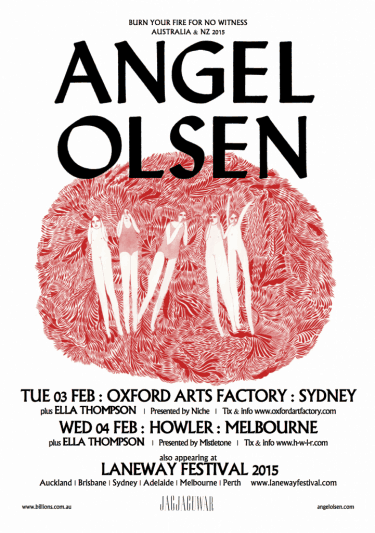