Due to overwhelming demand, selling out Sydney and Brisbane, Bonobo will perform two shows at Sydney’s Enmore Theatre on August 3rd & 4th before heading to Melbourne’s Margaret Court Arena on August 5th and another show added in Brisbane at The Tivoli on August 7th & 8th!

One of the biggest names in dance music, Simon Green has cultivated one of the most consistent sounds in electronic music and makes productions both celestial and body-moving. Green’s career includes 3 Grammy nominations and playing to 2 million people for the tour supporting his 2017 album Migration. Migration reached #1 on Billboard’s Dance album chart and hit top 10 positions in several countries. He is also a favorite mainstage performer at the world’s greatest music festivals and has worked with Erykah Badu, Ólafur Arnalds and Jon Hopkins, and remixed artists including Michael Kiwanuka, Gorillaz, George Fitzgerald and London Grammar.

His newest release ‘Fragments’ is the most emotionally intense record that Bonobo has ever had to make. It’s no surprise that it’s also his masterpiece. The album features Jamila Woods, Joji, Kadhja Bonet, Jordan Rakei, O’Flynn and Miguel Atwood-Ferguson. Born first out of fragments of ideas and experimentation, the album ultimately was fused together in a burst of creativity fueled by both collaboration and Green’s escape into the wild.

in a decade: soothing, energetic and just right for the current moment”

“The tastemaker’s soundtrack to an existential summer” 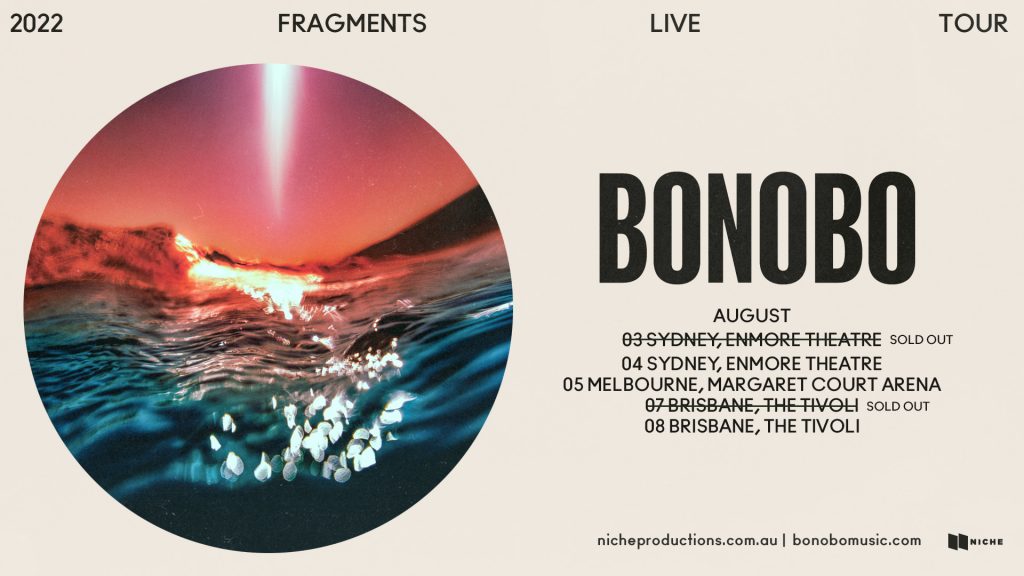 Tickets for the added shows go on sale 31st March 10:00am Local Time