Riding a tidal wave of acclaim and praise, Chicago-native, CHANCE THE RAPPER will play his very first Australian headline shows this January.

Already announced for Field Day and Beyond The Valley festivals, Chance brings his vibrant rhymes and jazz-tinged, retro beats to Sydney’s Big Top on January 3 before taking over Melbourne’s Festival Hall the following evening – January 4.

Breaking through with 2013’s Acid Rap, Chance built his reputation one mix tape at a time, attracting an ever-growing audience and big-name fans along the way.

Critically acclaimed and played more than 57 millions times, it’s the first album to crack the Billboard Charts on streams alone, peaking at number 8, a stunning end result for a kid who recorded his first mix tape #10Day while suspended from high school.

Currently one of hip-hops most sought after collaborators, Chance is responsible for five tracks off Kanye West’s The Life Of Pabloincluding ‘Famous’ and ‘Ultralight Beam’ as well guest appearances with Macklemore & Ryan Lewis, Lil B and Skrillex.

Kanye said it best when describing Chance “we are standing in front of the future”.

Also performing at Field Day & Beyond The Valley festivals. 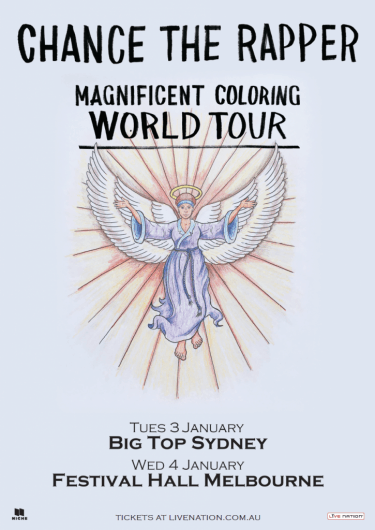