Niche Productions is thrilled to announce Australia’s princess of dark pop, CXLOE, will be making her awaited return to the live stage this May and June for her biggest headline tour to date. The Heavy Part I Tour follows the release of her debut EP Heavy Part I, and will see CXLOE performing her hot new single ‘Cry & Drive’ along with favourites including ‘12 Steps’, ‘Heavy’ and ‘Swing’ from the critically acclaimed EP live for the very first time.

The Heavy Part I Tour will see CXLOE taking to the stage Friday 21 May at Melbourne’s The Night Cat, followed by Big Pineapple Festival in Queensland on Saturday, 23 May. Then on to Wollongong at The Illawarra Hotel on Sunday, 28 May. CXLOE will then head to Adelaide and Perth, performing at The Lab on Friday, 4 June followed by Jack Rabbit Slims on Saturday, 5 June. Wrapping up the tour will be two shows in CXLOE’s hometown of Sydney on Friday 11 June at Oxford Art Factory; an early show at 6:00pm followed by a late show from 9:00pm. followed by Newcastle at the Cambridge Hotel on Sunday, 13 June.

Ready to be back performing live, CXLOE shares:

“So stoked to be finally touring my debut EP Heavy Part I! I feel so lucky we get to play live music in Australia and can’t wait to play these songs that I’ve been sitting with for so long. It will be the first time I get to play my new single ‘Cry and Drive’ so I’m really excited for everyone to see a different side of me and my music. The song is vulnerable and sonically unlike anything I’ve put out before.”

CXLOE fans can access the Artist pre-sale for 24 hours beginning at Tuesday 4 May (12noon AEST) by subscribing to CXLOE.COM

General public tickets will be available Friday 7 May (12noon AEST).

Alongside her tour news, CXLOE has today revealed new music is on the very near horizon, announcing that her first single for 2021 ‘Cry & Drive’ will be released next Thursday 6 May.

Tickets are sure to move fast to see this ever-rising star in action – don’t miss out! 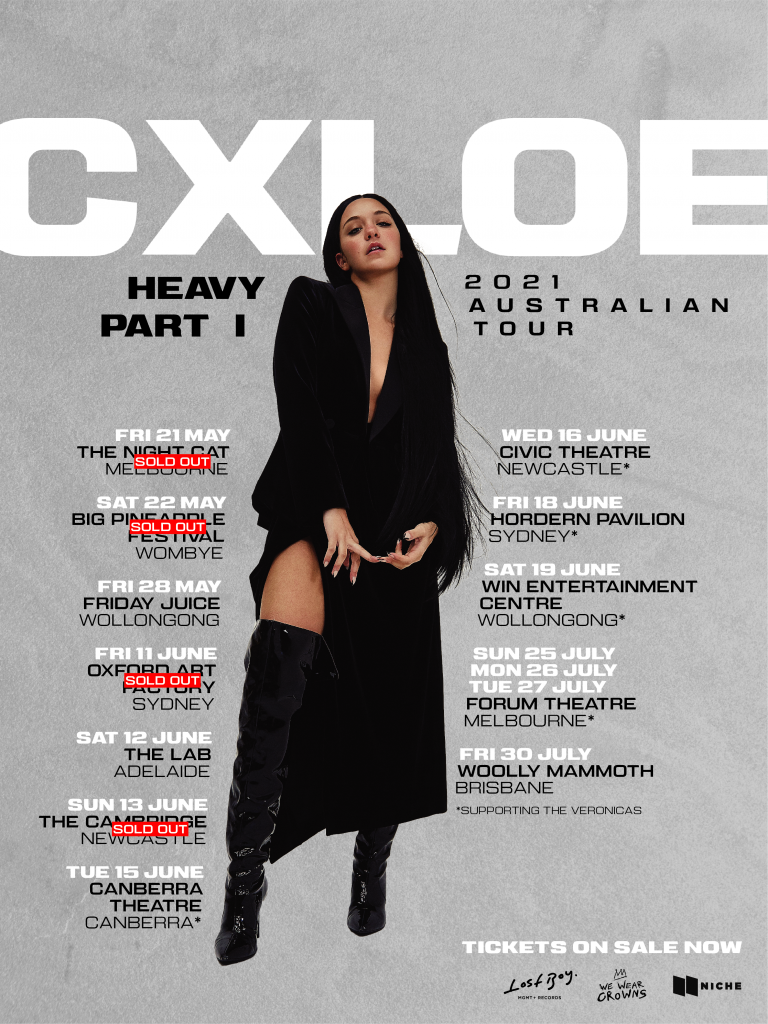