Hailing from Sydney’s northern beaches, CXLOE is a breakout artist with experience beyond her years. Wandering between alternative and electronic, her pop sensibility brings these two diverse genres together to create a sound all of her own. The pure musical aesthetic met with complex and dark lyrics brings a true contrast to her artistry.

CXLOE’s breakthrough single ‘Show You’ premiered on Spotify’s New Music Friday in 21 countries and is rapidly approaching 10 million streams. Shortly after its release it was added to full rotation on triple j as well as every commercial radio station in Australia, solidifying CXLOE’s position as a true star on the rise.

Fresh off a successful run of arena shows supporting Maroon 5, CXLOE’s latest offering ‘I Can’t Have Nice Things’ premiered on New Music Friday in 28 countries and is showing her fan base the many different layers to her artistry. 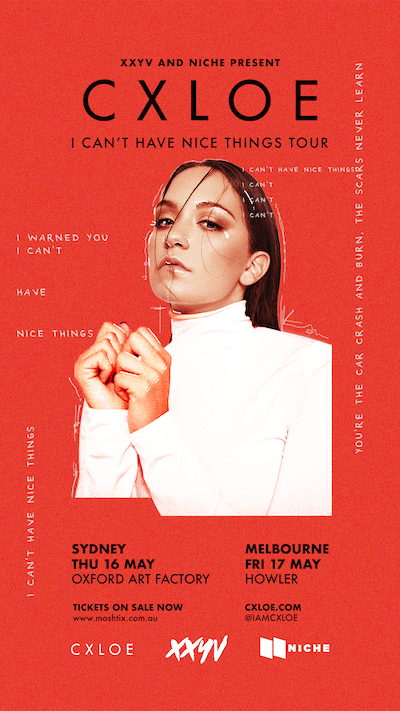