R&B/Soul rising superstar DANIEL CAESAR will come to Australia for the very first time in March to play three shows in Brisbane, Sydney and Melbourne.

The 22-year-old Toronto native launched his musical career in 2014, releasing R&B & soul songs bathed in ambient electronics. He rose to fame after the release of his EP Praise Break in 2014, followed by Pilgrim’s Paradise in 2015.

In August 2017, Caesar released his soulful debut album Freudian, which included the 2016 hit “Get You” plus beautiful singles “We Find Love” and “Blessed“. Caesar’s full catalogue has garnered over 160 million global streams on Apple Music and over 200 million streams on Spotify.

Caesar’s work is influenced by both religion, which played a large role in his upbringing, and unrequited love. His gospel undertones, heart-tugging guitar chords, and soothing harmonious vocals makes listeners feel, rather than just hear, as he delivers life’s lessons of love, loss, faith, desire and determination.

Daniel Caesar is nominated for two Grammy Awards in 2018 for the Best R&B Performance and Best R&B Album category. 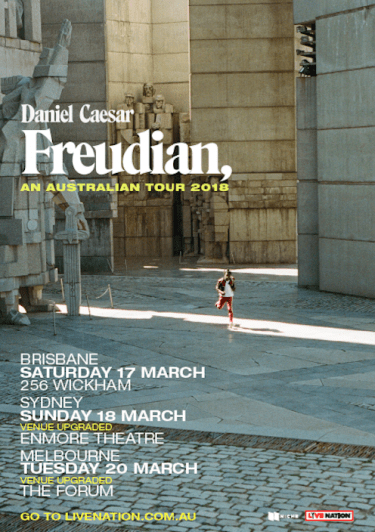