Remember the good old days when festivals weren’t overcrowded; queues weren’t a feature of the day; fellow punters were friendly, genuine music lovers; and everyone was there to see their favourite alternative acts and to discover new music? Well, those days are back thanks to the team at Niche Productions and Waterfall Entertainment!

In its sophomore year Days Like This! 2010 is once again hosting one of the most credible music line-ups for this summer. Hitting Sydney’s Moore Park Entertainment Quarter on Sunday 10th January the boutique music event has limited tickets to keep its chilled out vibe.

Even after the recent, mightily impressive addition of hip hop legends Method Man & Redman, Team Niche & Waterfall didn’t stop their quest to make Days Like This! the ultimate festival experience. It’s with great pleasure that Days Like This! 2010 welcomes these additions to its line up:

First off the bat is THEO PARRISH (US), a master of sound sculpture and downright legend in Detroit’s unground music scene, he began spinning and producing tracks in 1986 at the age of 13 and today is renowned worldwide for dynamic DJ sets of down tempo jazz-funk and disco. With his unique take on Detroit tech-house as a melange of distorted disco-funk and boogie, Theo Parrish will bring the house down at Days Like This!

For those of us who caught the bug with Brazilian drum’n’bass through the beautiful work of DJ MARKY (BRA) the time has come to witness this original again with his forthcoming performance at Days Like This! DJ Marky is undoubtedly one of the most exciting DJs to emerge in the drum & bass world. With his phenomenal technical skills and Brazilian flair, enthusiasm and dedication, he has impressed clubbers and music industry alike.

SPACE INVADAS is Katalyst and Steve Spacek. The story goes something like this…In 1960s when aliens first visited earth they took many things back into space. One of the things they took was numerous examples of soul music. Feeling the music they proceeded to write their own songs. Not having the vintage equipment to record them traditionally, they sent them to Space Invadas to record. The music they made they called soul-fi. Space Invadas’ debut album “Soul-Fi” is about to land and their first single ‘Original’ featuring Buff1 and RuCL has just hit the airwaves across the nation. Be one of the first to experience the alien soul-fi live at Days Like This!

Sydney fashionistas LOST VALENTINOS have been described by NME as “a skittering shitstorm of punk fury, disco beats and psychedelic excursions, the sonic invention of M83, Can and My Bloody Valentine melding with the panty-poking fun of Wham!, The Pixies and The Human League.” Lost Valentinos will show off old hits and new tricks from their brilliant debut album Cities of Gold when they hit the Days Like This! stage in January.

Twenty-one year-old Mexico-born, Texas-raised Alan Palomo is a restless fellow. NEON INDIAN (USA) is his third musical identity in two years, following the short-lived Ghosthustler and the ongoing Vega. A gauzy combination of Buggles-style 1980s pop, video game soundtracks, and cheeseball elevator music, Neon Indian’s fresh and fun debut album Psychic Chasms is effervescent, goofy, and achingly nostalgic. Neon Indian took some time preparing his live show teaming up with artist Alicia Scardetta to help with its eyeball attack, and you can bear witness to the audio-visual spectacle at Days Like This!

Hailing from Brighton, FLEVANS (UK) was one of the earliest signings to the Tru Thoughts label, who recognized his innate knack for and instantly infectious hooks. As a DJ, Flevans has played across the globe, from headlining slots at the UKs Big Chill Festival to Friends & Family in Tokyo, Turntables in NYC, and clubs all across Europe. Expect a little bit of funk, rare groove, hip hop, broken beat to electronic & house and of course a few Flevans & Tru Thoughts exclusives when he takes on Days Like This! 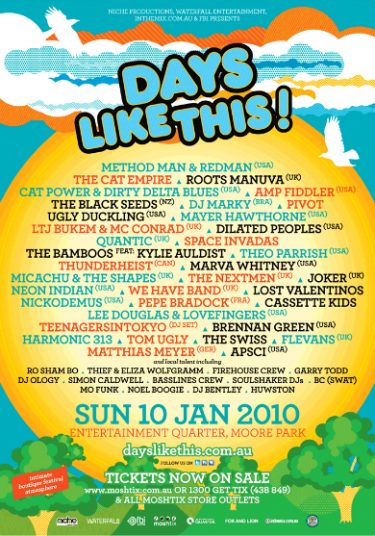