Returning to Australia this February atop the St. Jerome’s Laneway Festival 2019 line-up, the ever-evolving rapper/songwriter DENZEL CURRY will perform two wild AF sideshows in Sydney and Melbourne this February – bringing the heat to what’s sure to be a hot summer music festival season.

Since his induction to the scene in 2011 with “King Remembered Underground Tape 1991 – 1995”, Denzel Curry has been creating some of the most dynamic hip-hop out there today. The SoundCloud generation rapper holds a talent for sharp lyricism and deeply personal storytelling – an iconoclast who takes great pleasure in telling you… he is the ultimate.

On his latest record “Taboo” (TA1300), Denzel delivers a groundbreaking musical performance which sees him as a deadly lyricist and disciple of rap’s forefathers while simultaneously felling the gap between the older generation and the new generation of SoundCloud rappers that he helped birth in both sound and style. It’s a genre-hopping exercise in presenting his psyche, which takes a deeply honest and occasionally uncomfortable look into what makes him tick. The triple j featured “Album of the Week” includes the Twelve’In/Goldlink collaboration ‘13LACK 13ALLOONZ’ and the Billboard certified hit single ‘CLOUT COBAIN’ which peaked at #6 on the Bubbling Under R&B/Hip-Hop Singles chart.

With his music and movements, Denzel Curry commands respect in a way few are able to as he tells stories that resonate with both the old and new generation audiences. South Florida’s favourite son is sure to bring the heat down under for what’s easily set to be the biggest Laneway sideshows this summer.

“Curry embodies the spirit of old-school hip hop with his raw magnetism and tantalizing wordplay while also appealing to the new generation.” – THE MUSIC 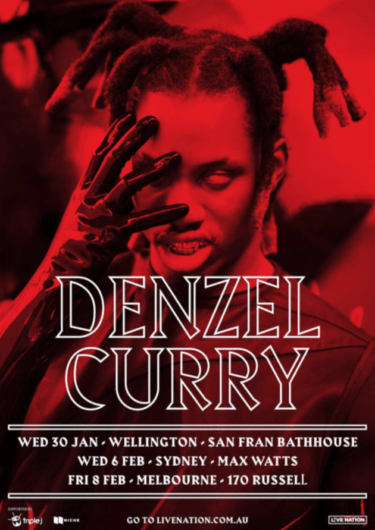