Dublin-based neo-electronic, new-age pop act EDEN has announced the extension of his vertigo world tour to now play Australia and New Zealand this June following sold out dates across the U.S. Audiences can expect the debut of his album “vertigo” and his impressive back catalogue being performed for the first time.

What started as the dance-oriented Eden Project morphed into something different for Irish singer/songwriter Jonathan Ng. The classically trained musician, who, as a teen grew tired of school band and orchestra began incorporating more instrumentation into his songwriting, unveiling his first EP rebranded as EDEN, “End Credits” released in 2015 at only age 20. The year following, alt-pop icon Lorde complimented his track ‘sex’, asking him to ‘please keep making lovely things’ timed with his debut tour to Canada and the U.S.

EDEN’s moving, sentimental music feels completely present, relevant and real. Perfectly placed at the intersection of pop-EDM, his introspective tone and lyrical journeys on contemplation drips with emotion, taking in influence as diverse as Paul McCartney, Frank Ocean, City and Colour and Skrillex. EDEN’s debut album “vertigo” is heartfelt and intimate and is slated to place the newcomer on the mainstream radar with a world tour throughout North America, Europe and now Australia and New Zealand – an opportunity not to be missed. 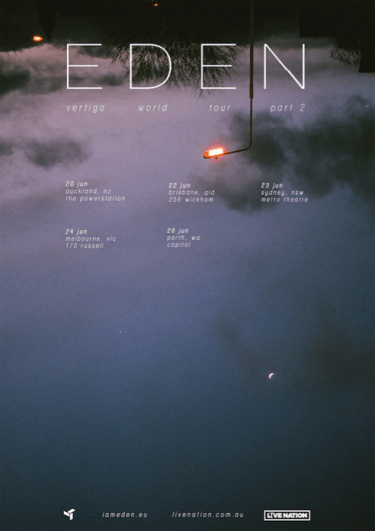