Perennial soul shakers Fat Freddy’s Drop are triumphantly carving themselves worldwide domination with a brew of diverse musical ingredients and blistering live shows. After sold out shows at the Sydney Opera House earlier this year, the band are happy to announce a full national tour to hit our shores in February 2016, following the release of their new album ‘BAYS’ on 23rd October 2015 – their biggest headline tour in Australia to date.

Sydney will have the pleasure of also seeing Hiatus Kaiyote, a neo-soul quartet from Melbourne, with a sound enriched by soul, jazz, flamenco, samba and West African music. Hiatus Kaiyote’s music is less a genre than an immersive experience – a trip that is not to be missed. Thomas Oliver, who is internationally recognized as one of the leading players of the Weissenborn lap-slide guitar, will share the stage at all shows. His dynamic solo performances will lead you on a journey venturing between roots, rock and blues.

Internationally Fat Freddy’s Drop’s reputation continues to soar with the band currently hitting 2 million streams a month. In their home country of New Zealand the seven strong band have claimed the highest selling album by an independent artist, a slew of RIANZ Tuis for everything from Best Producer, Album of the Year, Best Artwork, Best Video to People’s Choice awards. At last count Freddy’s has played to over 800 shows in their career, clocking up over 450 appearances in Europe alone and 300 shows in their homeland.

Freddy’s sound famously draws on the lexicon of black music with a Pacific twist, from the reggae and dub of Based On A True Story (2013) to the electronic boil ups on Dr Boondigga & The Big BW (2009) and Blackbird (2013). No two live shows are ever the same with the line up pretty much remaining the same – vocals, guitar, synths with assorted keys, a three piece horn section as well as a guest MC. The music composition starts from a collective jam reflecting a mix of influences from soul, reggae and techno. You might sometimes detect a side order of country or epic dub. You might even get a whiff of blues, ska or Chicago house!

After emerging from humble beginnings amidst the underground music scene of Wellington, New Zealand in 1999, Freddy’s are still together 16 years later, still doing things in their inimitable way and still getting better and better.

‘….. years of traipsing local and international gig circuits have cemented Fat Freddy’s repertoire as a must-see live gig……. Fat Freddy’s Drop are the epitome of old school cool and continue to embody their eclectic flavor of music, lyrics and beats’ – The Guardian

‘….a show that’s both polished and unpredictable in equal measure….. truth is they really are a band to experience firsthand, that no collection of words or recordings will ever quite be able to capture’ – Resident Advisor

‘…. Few bands have created a sound so uniquely theirs whilst keeping it so open for manoeuvre’ – BBC 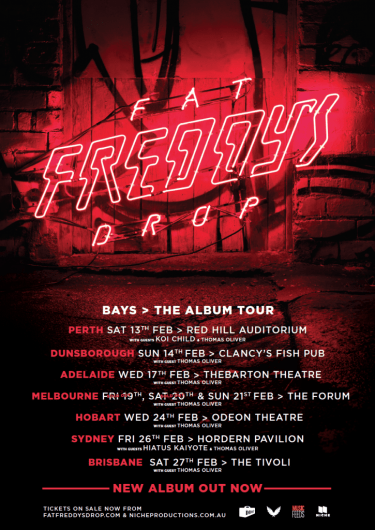