Having sold out their debut headline show in July 2020, Foley embark on their first headline tour across New Zealand, hitting cities Wellington, Dunedin and Auckland. Buoyed by their two most recent singles – radio hit ‘So Personal’ & fan track ‘Rendezvous’ – the pair will tour their anticipated sophomore EP, Vacation, out March 12.

“Vacation has confidence to it. As a concept it’s obviously an escape from the normal, but is also quite aspirational. Everyone has an idea of their perfect holiday or getaway spot, being somewhere or being with someone who you can feel at peace with, and where you can be your best. For us, Vacation is us trying to be our best to our partners, friends, families, and a reminder to enjoy ourselves. It’s us being confident in our creativity and aspiring to be better”

Foley is the late night conversations, not-so-existential crises & the genuinely unbreakable friendship of 20-somethings Ash Wallace and Gabriel Everett. Honest to a fault, Foley have quickly picked up a fanbase of young like-minded listeners for their confessions of love, loss and learning.

Known for their energetic performances, Foley graced the main stage at New Zealand’s Rhythm & Vines twice and will return in 2021 to the stage to support SIX60 on the New Plymouth leg of their 2021 stadium tour. In previous years, the pair have also shared the stage with Two Door Cinema Club, Flight Facilities & Crooked Colours and opened for Drax Project.

Taken from the upcoming Vacation EP, their latest single ‘So Personal’, was added across-the-board to major radio playlists instantly on release and has since gone Top 40 across radio & Shazam charts. Alongside fan track ‘Rendezvous’, the stage is now set for their sophomore effort

Their debut EP ‘On My Conscience’, saw huge success across commercial radio and streaming platforms, hitting #10 on the NZ Album Charts and plastered the pair across multiple Spotify playlist covers. Taken from the EP, their single ‘Midnight’ was added across all major NZ radio stations, landing the pair their first radio Top 40 chart position, while also becoming the #1 independent song on NZ Radio.

Foley have also landed a prestigious APRA Silver Scroll Nomination in 2019 for their fourth single ‘Can’t Help The Way’ which hit #2 on the Official NZ Hot 20 charts. 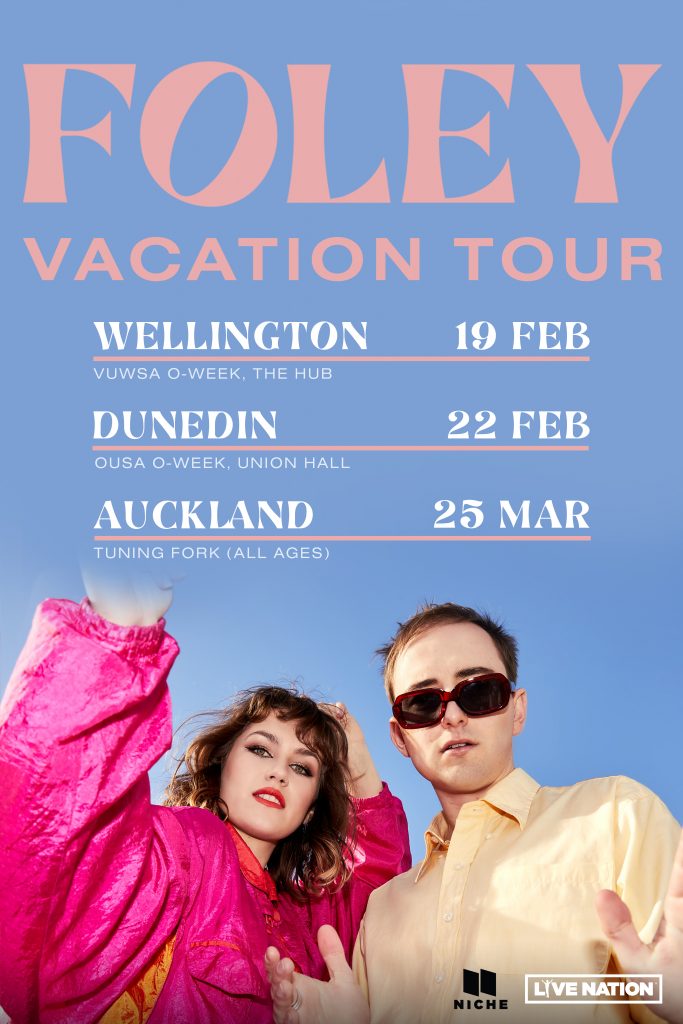