A release made for the live domain, Fortunes. will take Disc Read Error to the stage again from late May, announcing today shows across New Zealand and Australia. Kicking off in NZ, they play at Auckland’s Neck of The Woods on Friday May 24th, followed by Wellington at Meow on Saturday May 25th. The following week they touch down on Australian soil, heading to Sydney’s The Chippo on Friday May 31st and following up in Melbourne at the Northcote Social Club on Saturday June 1st.

Disc Read Error arrives as the first new music since their 2017 soulful release “Daddies” and their Undress EP, featuring critically acclaimed singles “501” and “Focus”, with nods locally and abroad from the likes of i-D, Acclaim, Pigeons and Planes and The Fader. Since meeting in high school in New Zealand and reconnecting at a Melbourne house party years on, the pair released their debut Hoodie EP in 2015. Quickly followed by 2016’s Jacket EP, they soon signed with Future Classic and embarked on their debut headline Australian tour. Keeping in great company, Fortunes. have since supported the likes of Alunageorge, Shlohmo, Kalela and Lapsley, and played across major festivals including Laneway Festival, Splendour In the Grass, Bigsound, Paradise Music Festival and more.

Grasping firmly onto the middle point between electronica, pop, soul and R&B, the duo have found the magical spot the genre melting pot that sets Fortunes. apart with Disc Read Error. With a stunning visual to match and tour dates just around the corner for Sydney and Melbourne, the unparalleled matching of both members delivers an all consuming emotional and sonic journey from start to finish 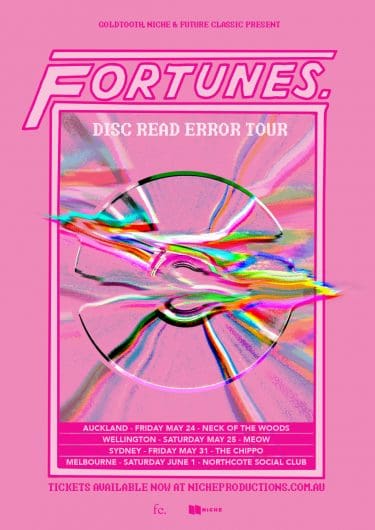