Dressed in black with his hair slicked back, G-Eazy adds a touch of class to hip-hop. For as traditionally dapper as he may be, he’s got both feet firmly planted in the future. So what does the future look like for the producer, songwriter, and rapper? Well, it’s just as bright as he is…

2013 saw G-Eazy complete his first headline tour, selling out shows everywhere from New York, Milwaukee, and Salt Lake City to Seattle, San Francisco, and Los Angeles. Looking more like a Tarantino hero than a standard MC, he stirred up a frenzy among the heavily female crowds, dodging a bra or two from the stage on a nightly basis. From the overwhelming success of the tour Paste Magazine named G-Eazy in their top artists to watch in 2013, High Times Magazine named him the “Best New Artist of 2013,” and Lil Wayne tapped him to join the America’s Most Wanted Festival nationwide tour.

The response has only grown more fervent, with G-Eazy’s second nationwide headline tour leading to the release of his highly anticipated second full-length album These Things Happen, which topped the Billboard Hip-Hop/R&B and Top Rap Albums Charts, also earning the #3 spot on the Billboard 200 and the Top Digital Albums Chart. The critics are in agreement with G-Eazy’s legions of fans, with Billboard proclaiming that G-Eazy is “The Young Elvis” in a multi-page feature story and The New York Times stating that G-Eazy is “clever, approachable and extremely legible” on These Things Happen. Even after VIBE exclaimed that “G-Eazy is, in fact, already a star, or at the very least destined to become one,” his goal remains the same as it did when he first started. 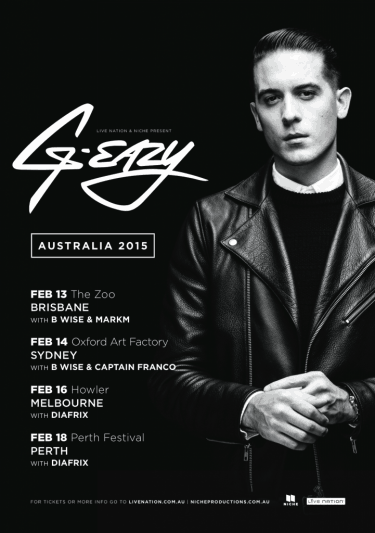