Consistently leading the music pack, Genesis Owusu today shares his newest single, “I Am”, out via OURNESS / House Anxiety. The returning release illustrates the star performer’s limitless artistry as he dresses his organic and groove-heavy sound to perfection, punctuated by deftly sung and spoken rhymes.

Extending the funk-rich foundations of prior single “Don’t Need You” while retaining an upbeat kinetic edge, “I Am” is a charismatic anthem owned by Owusu’s falsetto harmonies and lashings of quick-witted call-and-response. Rich, full-bodied tones between sliding electric guitar and neat snares sit beneath “pray for me” chants from Owusu, buoying the track firmly in the hip-hop stratosphere.

House Anxiety’s Founder / Director of A&R, Jaimie Hodgson on the signing: “I’ll never forget the first time I came across a Genesis Owusu song, it’s the kind of moment you dream of as an A&R. I just kept skipping it back to start as soon as it finished. He’s a truly singular talent, for singular times. An artist whose music feels just as important as it feels infectious.”

In celebration of the new single, Genesis Owusu has announced Kofi’s Black Dog Jams, a run of intimate October show dates at Mary’s Underground. Reworking his hard-hitting back catalogue for these special performances, Owusu will be supported by his own jazz band for as he strips back his previous singles and showcases upcoming music for the first time. Performing on Wednesday 21st, Thursday 22nd & Friday 23 October 2020, each evening will offer up a 7pm and 10pm session. With tickets on sale now, do not miss this chance to get the Genesis Owusu experience unlike anything you’ve seen before from the Goon Club leader.

Genesis on the upcoming performances: “Black Dog here. Stepping away from the fervour and ferocity that Genesis Owusu shows have become known for, I’ve decided to give you something a little more intimate. An underworld jazz club for goons and gabs alike, soundtracked by yours truly alongside my new, live Black Dog band. We’ll be playing unheard tracks, as well as re-imagined versions of the tracks you already love. A one-time-only series of shows, Genesis Owusu presents: Kofi’s Black Dog Jams.”

Adding further showings of innovation to his repertoire, Genesis Owusu’s reputation for authenticity and originality remains unfaltered. Growing with every release, he remains one of Australia’s best voices embracing challenge and improvisation in the process. Like “Don’t Need You”, “I Am” was produced by OURNESS label founder Andrew Klippel, mixed by Dave Hammer (Lime Cordiale, Jess Kent, Mia Rodriguez) and included a studio band made up of Kirin J Callinan, Michael DiFrancesco (Touch Sensitive) and Julian Sudek (World Champion) alongside Genesis.

Always exceeding expectations, Genesis’ debut EP Cardrive and breakthrough follow up “Sideways” (produced by Hiatus Kaiyote members Simon Marvin and Perrin Moss) introduced him to the world as an exciting new talent, before his 2018 singles “Awomen, Amen” (produced by Simon Marvin and Perrin Moss) & “Wit Da Team” (produced by Callum Connor) put his name on the map and secured a loyal fanbase. Arriving in 2019, AA side “WUTD” & “Vultures” illuminated his thrilling adaptability, going on to land his first ARIA-nomination for Best R&B/Soul Release and gain attention from tastemakers Sir Elton John, triple j, mixmag and more. Follow up AA Side “Good Times” & “Simmer Down” equalled in execution, but once more flashed a fresh side to the multi-faceted artist and racked up close to 10 million streams in 2019 alone. Prior 2020 single, “Don’t Need You” quickly shot to #1 on triple j’s Most Played and was adored from community radio nationwide, while “Whip Cracker” affirmed Owusu’s sharp acumen attuned to needed conversations.

The release of “Don’t Need You” was celebrated with a live performance from Red Bull’s House Party viewed by over 34,000 fans, attributing its wild success to Genesis’ stellar strengths on stage. Sort your next fix via the stereo with today’s enigmatic release, “I Am” or catch it live in concert this October, as 2020 continues to play out to the ever-originative sounds of Genesis Owusu. 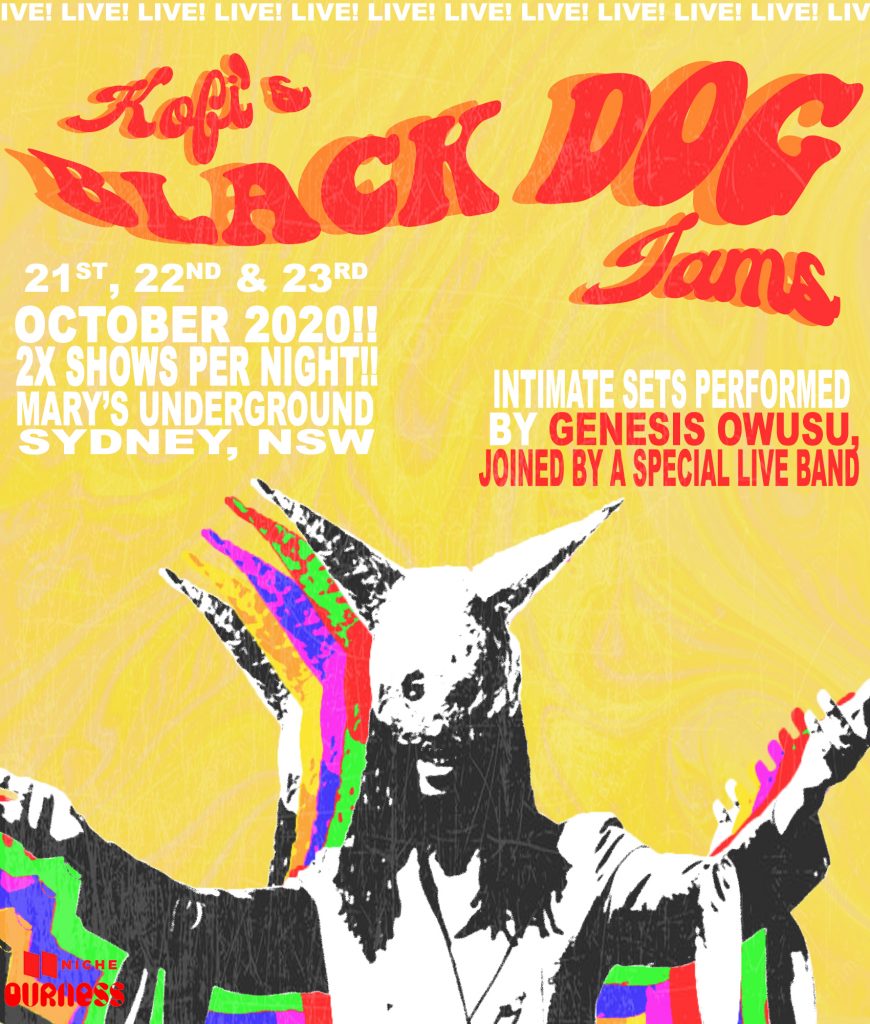