With his first release of 2019, Genesis Owusu returns today with a double dose of his perfect fusion of hip hop & R&B in “WUTD” & “Vultures”, out today on Ourness. Produced by The Free Nationals’ Callum Connor, the AA side solidifies the pairings flawless collaborative relationship, with both singles shining in singularity and together illuminating the range and diversity that propels Genesis Owusu as a frontrunner of Australia’s most exciting new talents.

Premiered last night on triple j’s Good Nights, “WUTD” gives us a glimpse into the breadth of Genesis’ musical capabilities, the chorus showcasing his silky falsetto & flowing through each verse with lush rap lyricism. Backed with a strong funk bassline and harmonised vocals, “WUTD” signals another fierce follow up to his partnership with Connor, continuing to champion Genesis’ dive into the world of R&B. Alongside the track Genesis has shared its video. Featuring Genesis dancing in a soft, blue haze the visual perfectly depicts what takes over someone when listening to the track: the freedom to groove without concern.

Following on, “Vultures” shines light on Genesis’ incredible rap performance, showcasing his immense talent and versatility. A testament to his rap prowess, Genesis brings the heat, firing off his rhymes rapidly to land gently in an instrumental oasis of dreamy synth melodies and pinpointed beats. “Vultures” rounds out a trifecta of the Connor and Genesis working relationship, further uncovering the many layers to Genesis Owusu’s artistic identity.

Geared with new material, Genesis will head around the country in April & May, starting at Canberra’s UC on Friday April 5 supporting Boo Seeka. From there he will head to The Foundry in Brisbane on Friday, April 26 for the first of his headline shows, followed by Sydney’s Landsdowne Hotel on Saturday May 4, Melbourne’s Workers Club on Thursday May 9 & finishing up at Rocket Bar in Adelaide on Saturday May 11. Highlighting himself as one of the strongest artists at the 2018 Bigsound Conference, Genesis took to the road for a headline “Wit Da Team” tour across Sydney, Melbourne and Canberra, impressing fans with his fierce and unapologetic stage presence. Keeping in good company, 2018 also saw him support the likes of Cosmo’s Midnight, Noname, Aminé and Safia, whilst also appearing along the festival circuit at Lost Paradise and an upcoming set at Victoria’s Hills Are Alive in just a couple of weeks.

Since being uncovered as a finalist in triple j Unearthed High at 17, Owusu has continued to capture the attention of the nation one release at a time. His 2017 debut EP, Cardrive introduced him to a crop of new admirers intrigued by his unique abilities, whilst his 2018 singles “Awomen, Amen” (produced byHiatus Kaiyote members Simon Marvin and Perrin Moss) & “Wit Da Team” (produced by Callum Connor) secured a fanbase hooked on his talent, receiving nods not only on home soil but from international tastemakers alike, including Okayplayer, Mixmag and XLR8R.

Continuing to make his mark on fans new and old, Genesis Owusu continues to impress and exceed expectations with each release. If today’s AA side is anything to go by, 2019 is set to be the year of domination for the 21 year old future-star of hip hop, rap and R&B. 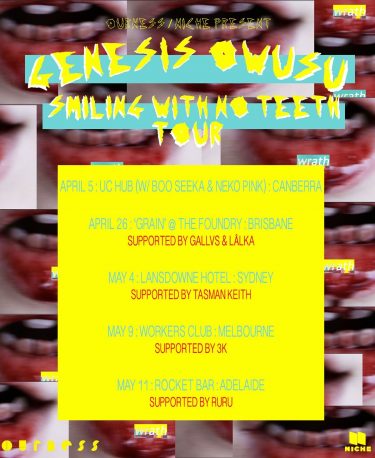