Haiku Hands ‘We Got Vinyl’ Tour

In 2020, the Australian dance-pop collective Haiku Hands (Beatrice Lewis, Claire Nakazawa and Mie Nakazawa) released their critically acclaimed, self-titled debut album. Today, the trio have released a brand new single ‘Conclusions’, along with a wild video. They will also release Haiku Hands as a limited edition classic black vinyl on, 4 Feburary, 2022 via Spinning Top Records / Mad Decent which will include the new single, ‘Conclusions’ alongside album favourites such as ‘Manbitch,‘ ‘Fashion Model Art (feat. Sofi Tukker),‘ ‘Not About You,‘ and more. Pre-order Haiku Hands on vinyl HERE.

Haiku Hands are also excited to announce they’ll be hitting stages across the country for their Australian Album Tour, ‘We Got Vinyl’ and a handful of festival dates in February and March 2022. Heading to Gembrook, Newcastle, Wollongong, Canberra, Brisbane, Melbourne, Adelaide and Sydney, tickets and tour info is available HERE

The group note that the new single came together in true Haiku Hands fashion “Conclusions is a driving in the car late at night, volume maxed, head banging, face scrunching kind of track. Pulsing burnt basslines and driving drums juxtaposed by floating melodic vocals instantly transport you to the organised chaos of Haiku Hands’ car yard complete with guard dog.  Written in full stream of consciousness mode and off a beat written on an iPhone on a plane by Suburban Dark, it’s a timely effortless take on human differences, ideas and why none of it matters when you’re in the zone.”

The video for ‘Conclusions’ was shot by three different cinematographers in three difference cities. Full of glitches in the matrix, lucid dreams and unexpected moments, Haiku Hands’ new video takes you on a wild ride through misty mountain highways, Sydney deserted carparks and median strips in Melbourne.

Rebellious, experimental and wildly unconventional, Haiku Hands was primarily recorded in Melbourne with Joel Ma (Joelistics) and features emblematic collaborations with SOFI TUKKER, Mad Zach, Machine Drum, Mirac, Elgusto of Hermitude and Lewis CanCut.  Featuring lead singles ‘Not About You,’ ‘Manbitch‘ and ‘Onset,’ the 12-track LP probes themes including technology, relationships, the absurd and social commentary.  “The record explores an attitude of empowerment, humour and positivity whilst also delving into darker themes and expressions. We aimed to be original in our creative choices, we were influenced by multiple genres and artists but were aiming to create something that sounded new and different,” muses Haiku Hands of the album. Listen to Haiku Hands HERE.

Based across Melbourne and Sydney, the core of Haiku Hands is Beatrice Lewis, Claire Nakazawa and Mie Nakazawa. Together, they curate, perform and work as a collective of artists, engaging and exploring social norms with their lyrical and visual content. Their influences range from hip-hop to pop, electronic to dance, and everything beyond.

23 April | Out of the Woods Festival, Busselton, WA 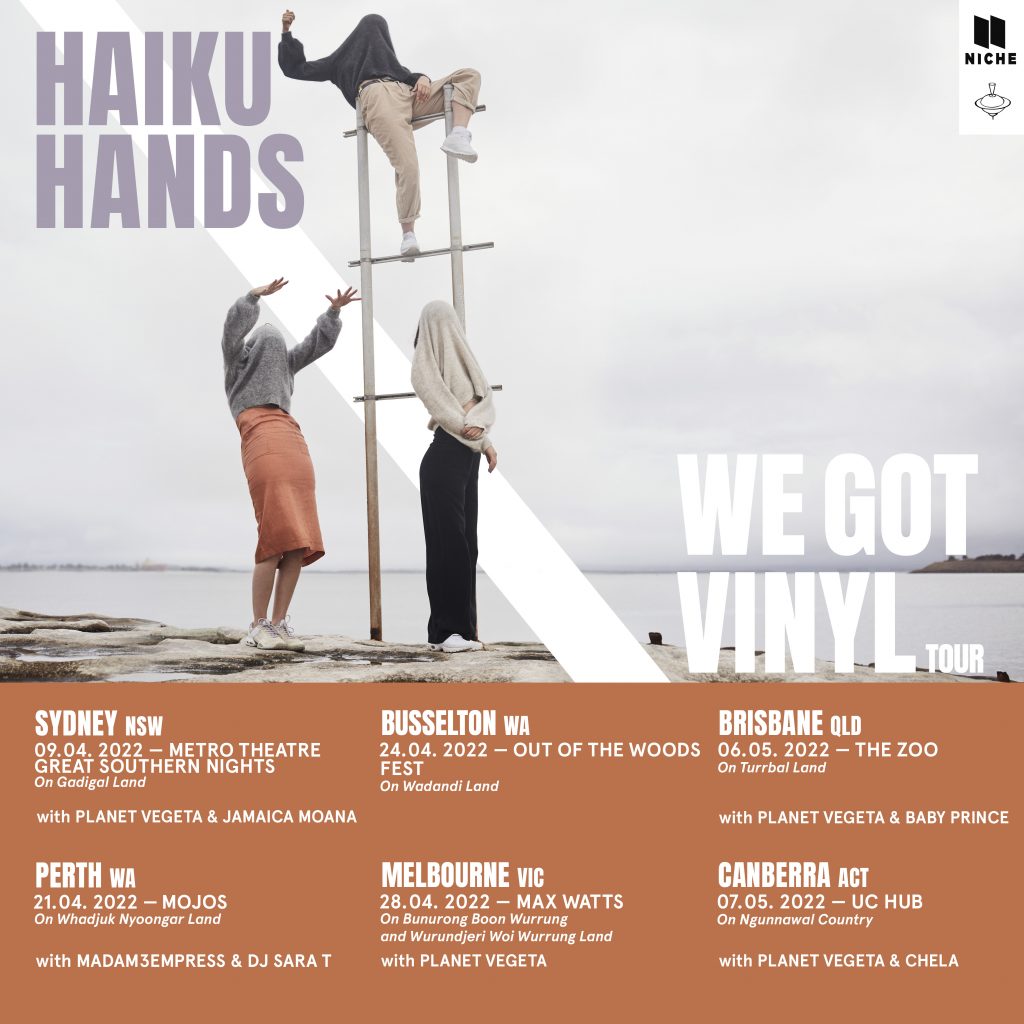