Harvey will bring his funk-infused live experience to venues across the country, along with a series of festival appearances including performances at Wine Machine Festival in Canberra, Yarra Valley and Hunter Valley, Parramatta Night Series in Sydney, Queenscliff’s By The Pier Festival, and Wollongong’s stacked Yours & Owls Festival.

Weaved into his packed tour run this year, Harvey Sutherland will present his immersive, in-the-round, quadraphonic live experience Neurotic Funk, a one-off live show in partnership with RISING and Melbourne Recital Centre. Performing new material from Boy plus favourites from his distinctive catalogue of esoteric dance music, Harvey will dismantle and re-imagine the iconic Elisabeth Murdoch Hall as a heaving, surreal club environment; no seats, just plenty of space for the dancefloor to thrive. With his new live ensemble and special guests, Harvey will share the stage with his audience, surrounded by surreal audio and visual elements uniquely configured for this RISING exclusive. The next step in the evolving Harvey Sutherland live experience, this show will only be performed on Friday, June 3 and Saturday, June 4 in Melbourne.

Harvey Sutherland is also sharing a remix package for his latest single “Feeling Of Love” feat. DāM-FunK. In this tidy collection staying true to his DJ roots, Harvey enlists the help of some of his favourite new and established producers to remix and reimage the already-beloved single, attuned for peak dancefloor moments. London rising-star India Jordan delivers a gloriously euphoric flip of “Feeling Of Love”, ratcheting up the funk to create a high-tempo, high-energy dancefloor cut that goes straight to the heart – watch a visualiser for the track here. Montreal’s dopamine prince Martyn Bootyspoon turns in a jacking club version that manages to be razor-sharp and completely unhinged all at once, while Worldwide FM selector Esa Williams enlists his acclaimed “Afro-Synth Band”- a ragtag collective of London synthesists – for this heavy re-work in their trademark South African ‘gumba fire’ style. Quote from the Blessed Madonna upon debuting the India Jordan remix on the BBB6 show: “Another exclusive for you now… Time for today’s Near Future track. A brand new one from somebody who I suspect must be a genius – Harvey Sutherland…”

Today’s tour announcement and remix package comes ahead of the release of Harvey’s debut album due for release on April 29th. Recorded between London, Los Angeles and Harvey’s own Swimming Pool Studio with a string of special guests and hotshot Melbourne session musicians, Boy is a hypermodern take on funk music. A self-diagnosed over-thinker and perfectionist, the forthcoming record’s finest fruits were birthed from endless nights of studio obsession and psychoanalysis, with Harvey’s theory of “neurotic funk” as his guiding North Star. Over an illustrious near decade-long career, Mike Katz aka Harvey Sutherland has continued to solidify his reputation as one of Australia’s finest electronic artists. From early EPs reflecting his crate-digging influences, to festival appearances at Glastonbury, Nuits Sonores, Pukkelpop and Meredith Music Festival, collaborations with the Melbourne Symphony Orchestra, and remixes for the likes of Disclosure, Khruangbin, Tycho, Surprise Chef, Julian Hamilton (The Presets) – Harvey’s world continues to grow and flourish.

Catch Harvey Sutherland tour his blissful and electric funk experience across metro and regional venues throughout 2022. 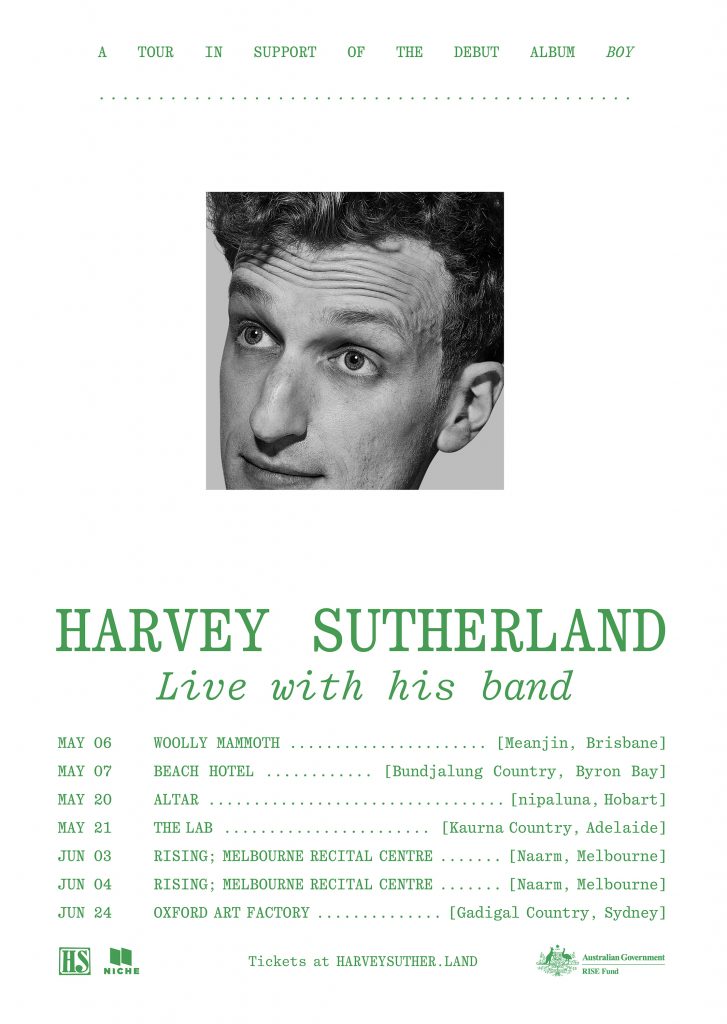