After a triumphant first iteration in Sydney last year, Imogen has rounded up another stellar line-up of guests to join the party. This January, she will be joined by Ali Barter, Anita Lester, Dan Kelly, Eilish Gilligan, Gretta Ray, I Know Leopard and Mo’Ju.

“It’s never felt more meaningful to celebrate making it to the end of another year and getting to play live music”, said Imogen.

“Thank you to everyone who has gone out and got vaxxed and made it possible for this show to happen. I am cooking up the ultimate party full of surprises with these amazing guests, and January can’t come soon enough!”

Released today is Clark’s brand-new Christmas song ‘When Can I Touch You Again?’. The song was written in a unique relay between all the musicians that contributed, starting with drummer Luke Davison (The Preatures), who laid down his drum track during the first Australian lockdown in 2020. It was built layer by layer by Mike Bloom (Rilo Kiley) on guitar, the late Nick Weaver (Deep Sea Arcade) on bass, Grammy-winning song writing legend Jim Lauderdale contributing the melody and Imogen Clark writing the lyrics with an assist from her frequent co-writer Anita Lester. The track was mixed and produced by Holy Holy’s Oscar Dawson (Alex Lahey, Ali Barter).

“Last year I put out a sad Christmas song, but this year we’re finally turning a corner on all the shit that’s been going on, so I’ve got a thirsty Christmas song for you all!”, said Imogen.

Get the track here.

Also revealed today are live solo and band dates from this November through to March 2022. Making up for lost time, Imogen will hit the road for a marathon tour over the coming months; this Friday 12th and Saturday 13th November, she joins Frenzal Rhomb’s Jay and Lindsay at Sydney’s Crowbar as a special guest, followed in January by performances to rock Newcastle’s The Cambridge and Sydney’s The Lansdowne, which will see Imogen take the stage with her full band to perform tracks from her extensive back catalogue, plus brand-new songs from her BASTARDS EP.

After paying tribute to Joni Mitchell’s classic album BLUE at Mary’s Underground on 22nd January, Imogen will kick off her solo tour dates through regional New South Wales and Queensland, with more shows to be announced in the weeks ahead.

All dates are on sale now – Head to imogenclark.com.au for tickets and more information.

Released in May, Imogen Clark’s BASTARDS EP signifies a defining moment for the artist. Recorded remotely between Sydney and LA, the EP sees Imogen team up with Mike Bloom (Jenny Lewis, Julian Casablancas) and engineer Will Golden on the defiant offering.

Across six tracks, she joins forces with some of music’s finest talent; Eilish Gilligan on ‘Forget About London’, Timothy James Bowen on ‘Casualty’, Dawes’ Taylor Goldsmith on ‘Never This Time’ and Men At Work’s Colin Hay on the emotive ‘First Class Man’, amongst others. 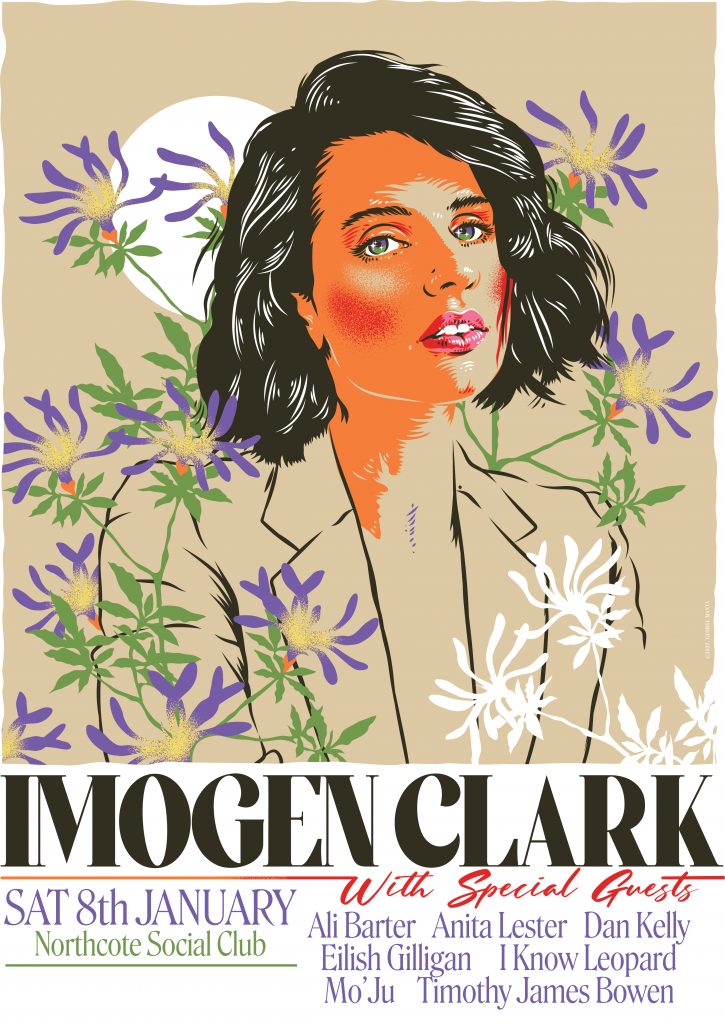