Last seen touring Australia in 2017 on J. Cole’s 4 Your Eyez Only tour, the East Atlanta rapper J.I.D has confirmed his return this summer with one HUGE headline show at Melbourne’s Max Watts on Wednesday, February 27. *Update – 2nd show added on Friday March 1 due to overwhelming demand*.

Growing up on a mix of his parents’ collection of classic funk and soul LPs, J.I.D first appeared on the Atlanta hip-hop scene with his debut EP “Dicaprio” in 2015. After a stint at Hampton University playing football, J.I.D hooked up with fellow MCs as part of the Spillage Village collective – eventually making the move to drop out of college and focus solely on music. In 2014 he set off on tour with EarthGang, Bas, and Ab-Soul – this allowed J.I.D to craft his skills, and a year later he recorded and dropped the “DiCaprio” EP, which saw him team up with a host of producers, as well as EarthGang.

Following up as a sequel to his 2015 SoundCloud EP, J.I.D’s sophomore album “Dicaprio 2” features a star-studded list of collaborators and producers, including 6LACK, A$AP Ferg, Joey Bada$$, Ella Mai, J.Cole and even features one of the last tracks ever produced by Mac Miller – out now on J. Cole’s label, Dreamville. Bringing back the three-verse structure, the mixtape structured album is a sheer skill-display – showing off how far his songwriting skill has grown since his debut album, “The Never Story” in 2017.

Australian fans get ready – J.I.D is bringing his dexterous, fired-up flow down under once again, stopping by Melbourne for his only Australian headline show, while on tour for Perth’s recently expanded rap and bass-heavy Hidden festival.

“One of the best traditional lyricists of his generation” – Rolling Stone 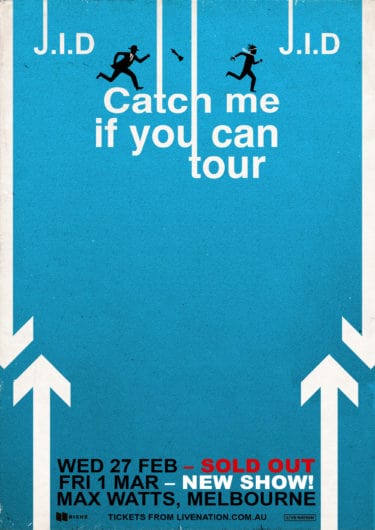