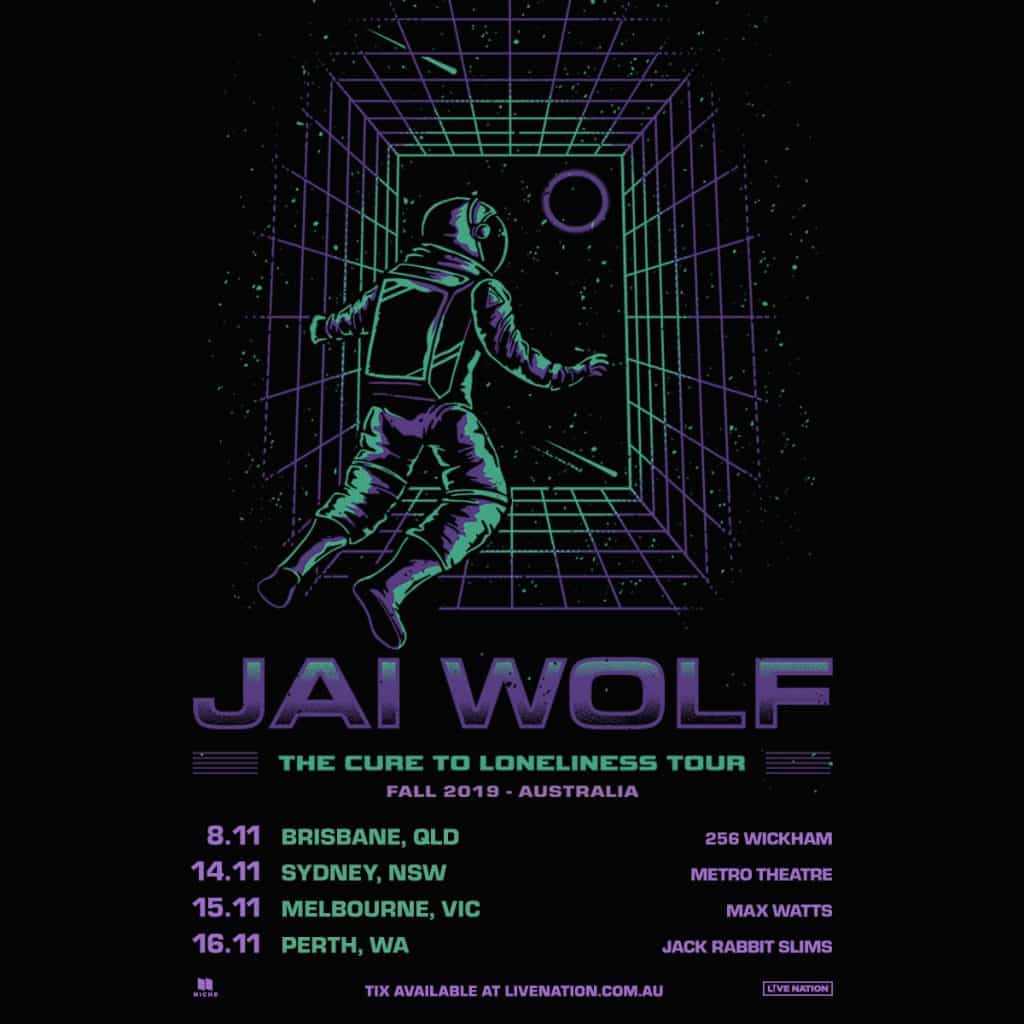 After hundreds of millions of streams, blockbuster festival sets and headline shows across the globe, JAI WOLF has today confirmed Australian tour dates on The Cure To Loneliness tour – kicking off in Brisbane at 256 Wickham on Friday, November 8 before heading to Sydney, Melbourne and Perth.

Born in Bangladesh, raised in New York City, inspired by everything from indie-punk to hip-hop, orchestral symphonies and the Bollywood classics of his parents, Jai Wolf’s life and music have been defined by a liminal quality that only a third culture kid could understand. It’s that quality that takes centre stage on his new record, “The Cure to Loneliness”. The album sees him slip between references to cultural moments with an ephemeral quality tinged with nostalgia. The sunny melodies and bombastic hooks bely subject matter that often ruminates on loneliness, distance, and a lack of place. This all converges to create an emotional complexity to the music that cuts deeper than the average festival fare.

Jai Wolf has taken an unconventional path to arrive at this point. It was Skrillex himself who plucked him from obscurity when he came across the then-fledgling bedroom producer’s bootleg of “Ease My Mind” in 2014. But it was ‘Indian Summer” that propelled him to the stratosphere, racking up tens of millions of streams, a major GoPro ad campaign, an appearance on American Idol, and even soundtracked Kobe Bryant’s final basketball game in the NBA. The song made Jai Wolf a star, but creatively, he was already looking towards bigger and better things.

“The Cure to Loneliness” completes his evolution from upstart bedroom remixer to future bass DJ to builder of lush musical worlds. While still very much dancefloor-focused, some tracks on his latest LP conjure the angular riffage of The Strokes and Phoenix, weave melodies through the sugary happy sad of M83 and CHVRCHES, or build up walls of sound like Explosions in the Sky – all while maintaining the melodious polish and evocative groove to which fans have grown so close.

Taking a different approach to many of his contemporaries under the wing of indie darling label Mom+Pop (Courtney Barnett, Flume, Jagwar Ma, Alina Baraz), Jai Wolf largely eschewed singles over the course of two years to patiently craft “The Cure to Loneliness”. The result is a thoughtfully framed, confidently expressed musical vision, that when experienced in a live setting will tug at heartstrings in 2019 and long beyond.

THE CURE TO LONELINESS – AUSTRALIA 20190