After commanding the New Zealand hip-hop scene to take notice in 2017 following the delivery of a compelling performance as the first female MC to perform on David Dallas’ Red Bull 64 Bars, JessB continues a thrilling trajectory of releases in 2020 that have extended attention globally and proved the rapper is here to stay.

Now, with the release of her 3 Nights in Amsterdam mixtape, JessB masters new sounds with hype-inducing confidence propelling her rising status even higher. She’s got streams in the millions, has spins on commercial and alternative radio, and in the past year alone, has scored a spot in triple j’s Hottest 100 countdown for her feature on Baker Boy’s NIMA award-winning single and video “Meditjin”, and featured on triple j’s Like A Version for G Flip’s rendition of “Lady Marmalade”. Additionally, JessB took home the 2019 MTV European Music Award for Best New Zealand Act, before seeing her debut triple j Bars of Steel performance go live on Apple Music.

Since releasing two acclaimed EPs between 2018 and 2019, JessB has been expanding her world and cultivating her sound across stages in London, Amsterdam, LA, New York and Australia, with performances at Venice Biennale, Red Bull Music Festival, Splendour in the Grass, Laneway Festival and Fire Fight Australia. Following strong support from Spotify’s global A1 Hip-Hop playlist, JessB performed at the flagship Spotify A1 Live event, and has since also made her livestream debut on London’s NTS Radio 24-hour on-air festival.

When she hasn’t been getting stamps on her passport, JessB has continued to infiltrate the New Zealand music industry from within – she’s toured with role-model Ladi6 and supported SIX60 and Fat Freddy’s drop, as well as international acts YG and Lil Simz and Stormzy.

When she wasn’t spending her days and nights writing and recording at Red Bull Music Studios, JessB has been flexing her creative chops as part of the new generation of local artists, featuring on “Flying” as part of NZ rap collective BLKCITY. She also ran a week-long workshop at Roundhead Studio with some of her favourite artists and producers, and co-curates the popular Filth club night with regular collaborator Half.Queen.

JessB launches her new project ‘3 Nights In Amsterdam’ across Australia in May. Starting the tour in Perth at The Bird on Sunday, 9 May, then heading across to Sydney’s Red Rattler on 13 May followed by The Lab in Adelaide on 14 May. JessB continues this tour in Adelaide at Section 8 on Thursday, 20 May and closes the run out at Big Pineapple Festival on the Sunshine Coast on 22 May. The six-track collection propels her rising status even higher as she masters new sonic landscapes and styles, pulling from dancehall, reggaeton, garage and electronic influences amid her trademark sass-leaning rhymes and hip-hop flavour.. 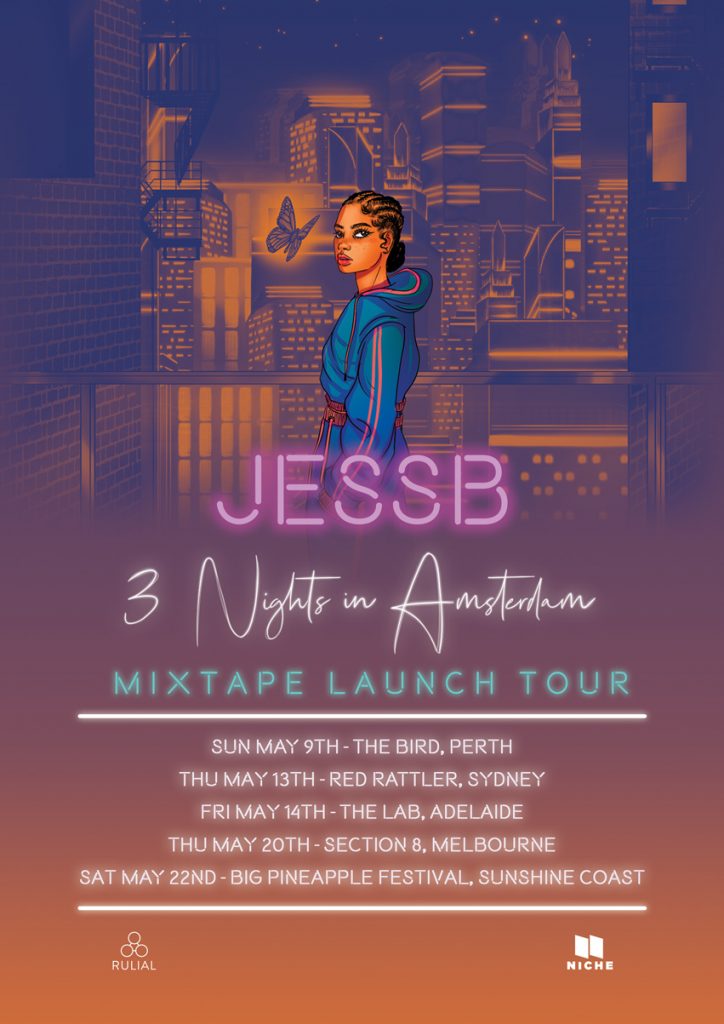