Following a hugely successful tour with sold out shows across Europe and the UK, Jordan Rakei will return home to Australian shores with his full band for a rare run of headline shows this March to celebrate the release of his breathtaking debut album ‘Cloak’.

Written and recorded in his new adopted home of London, Cloak is a scintillating and timeless debut drawing influence and inspiration from the discovery of meditation, the separation from ego and a personal conversation with self. Delving deeper into his creative well, Jordan has delivered a record that continues to push personal and societal boundaries, a visionary journey through groove based soul, jazz and hip-hop with hints of psychedelia and afro percussive rhythms.

With guest appearances from fellow Australian’s Remi. and Ngaiire – and a feature cameo by the sublime Richard Spaven on Toko – Cloak will take you down the rabbit hole as Rakei expertly navigates explosive new boundaries, where colour and sound collide. 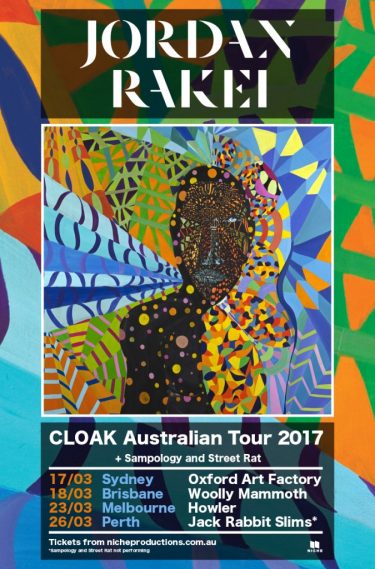