Last in Australia to support Kendrick Lamar’s sold out shows across the country, Kamasi also performed his own shows to rave reviews and sold out his Melbourne show. The high priest of sax will mesmerise fans at Melbourne’s Forum Theatre on March 9 and Brisbane’s The Triffid on March 14. Kamasi is set to play a special show at the Sydney Opera House on March 13. He will also be appearing at Womadelaide in Adelaide on March 11 and Golden Plains Festival in Melbourne on March 13.

Kamasi is back in Australia to celebrate the release of his new EP, Harmony of Difference, featuring the new song “Truth”. This is Kamasi’s first offering since he released the universally acclaimed 2015 debut album, The Epic which won numerous “best of” awards, including the American Music Prize and the Gilles Peterson Worldwide album of the year. Washington followed that work with collaborations with other influential artists such as Kendrick Lamar, Run the Jewels, Ibeyi, and John Legend. Kamasi is also the mastermind of “Harmony of Difference,”; a standalone multimedia installation during the 2017 Biennial at the Whitney Museum of American Art in New York City. Like his debut album, The Harmony of Difference was released to the praise of critics, charting #1 on the jazz charts and #53 on Billboard 200.

His latest release is an original six-part suite that explores the philosophical possibilities of the musical technique known as ‘counterpoint’, which Washington defines as “the art of balancing similarity and difference to create harmony between separate melodies”. A follow-up full length album is set for release next summer.

Fusing elements of jazz, soul, classical, hip-hop and even gospel, this is a chance to see this eclectic talent in these two initimate shows this March.

“Is it possible that Jazz could finally stream into the ears of the “Y” generation? If Kamasi Washington has anything to do with it, then the simple answer is a huge YES! “ – The Music

“ he is an innovator that play with deep feeling, producing bop, funk, blues all through a single, musically expressive language” – Beat Magazine 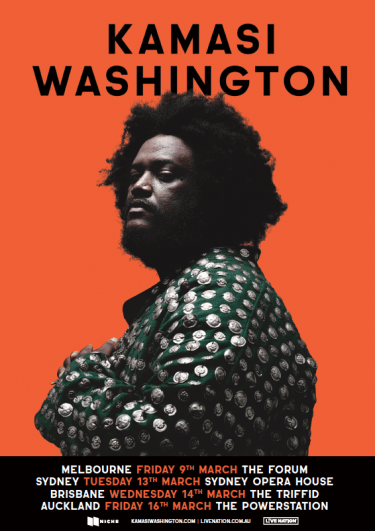