The Oxford Art Factory and Niche Productions are very pleased to announce that LA-based singer and songwriter Kelela will be bringing her sultry blend of R&B and electronica to the Oxford Art Factory on the 22nd January 2016. Also performing at Melbourne’s Sugar Mountain Festival, Kelela is sure to woo Australian audiences over with her ethereal vocals and hypnotic trap beats.

Two years in the making, Kelela’s long-awaited latest release the Hallucinogen EP draws inspiration from an array of influences, from Wiley and Tamia through to Aphex Twin. Led by the luminous and upbeat first single “Rewind” (added to high rotation on triple j the day it was released), the EP has been embraced by music critics, with Consequence of Sound recounting “Kelela gathers momentum, pounces, bursts, and recedes like smoke. But more than that, Hallucinogen shows a powerful sense of purpose.”

Hallucinogen follows the acclaimed 2013 debut mixtape Cut 4 Mewhich experienced wild success, accelerated by her collaboration with Kingdom on the reworked track “Bank Head.” Garnering praise from SPIN as “a synaesthetic gold mine of multi-sensory stimuli,” Cut 4 Meclosed out the year on a number of ‘Best Of’ lists, including #7 on The Guardian’s ‘Best Albums of 2013.’

One of the most exciting artists to come out of LA, Kelala’s vocal range can evoke feelings of darkness and brooding in one moment, and transcend to angelic and airy in the next, thus having attracted comparisons to performers such as Janet Jackson and Aaliyah. With her sensuous combination of moody melodies and futuristic production, Kelela will mesmerize Oxford Art Factory with her 90’s R&B throwback sound and grime flourishes. 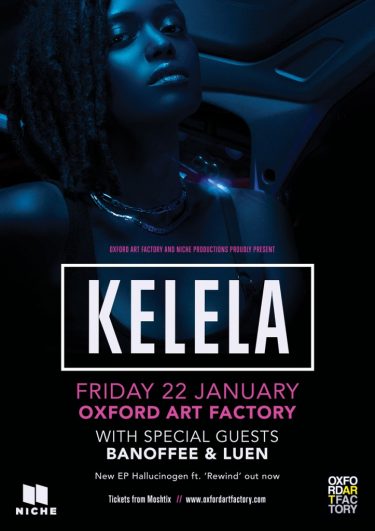