Niche are proud to present the return of soul legend LEE FIELDS and his phenomenal six piece band THE EXPRESSIONS to Australia. Having already been announced on the lineups for Golden Plains Festival and A Festival Called Panama, he will play two exclusive headline performances in Melbourne and Sydney this March.

You’d be hard pressed to find another singer who’s ever worked as hard as Fields. There aren’t too many artists making soul music today who had a release in 1969; Lee Fields, however, is one such artist—or maybe he’s better labelled a phenomenon.

“I feel that every human being’s purpose is to do what their inner voice says to do,” says Lee Fields. “And my inner voice, my driving force, wants me to put out music and keeping making better records.”

Fields has toured the world with musical legends like Kool and the Gang, Sammy Gordon and the Hip-Huggers, O.V Wright, Darrell Banks, and Little Royal. Recorded with French house DJ/producer Martin Solveig. And somehow found a newer, younger audience and become more prolific as the years transpire.

“In a curious case of musical evolution, the older Fields becomes, the closer he gets to perfecting the sound of soul that he grew up with as a young man,” noted NPR music writer Oliver Wang (and that was back in 2009).. Now Fields returns with his most triumphant and honest record yet, Special Night, recorded with The Expressions and released on Brooklyn’s Big Crown Records. You’ll hear Fields flexing his strengths on Special Night. There’s some JB-style funk on there. And hints of Stax, Chess, Fame and Motown.

Don’t miss out on what are sure to be two extraordinary performances of contemporary and throwback soul with Lee Fields & The Expressions! 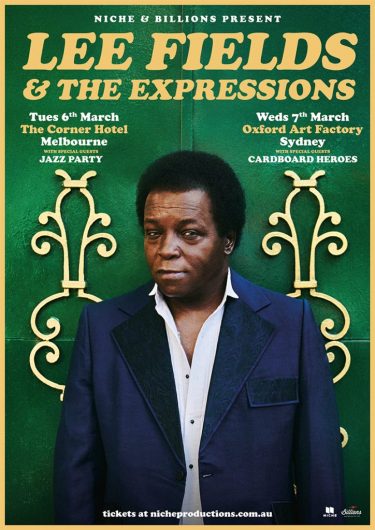