Hailing from Western Sydney, Lil Spacely is an up and coming hip hop prodigy. Performances have included FOMO Festival 18′ alongside names like Post Malone, SZA, and Listen Out 18′ featuring Manu Crooks, Asap Rocky and Skepta. As well as appearing all over Australia amongst artists like B-Wise, Camouflage Rose and platforms like Red Bull Australia, Complex Australia and performing at Rolling Loud 18’ with Manu Crooks.

Lil Spacely stays hard at work in the studio as well, in the last two years he has been part of releasing singles like Dopeboy, Code#, You Know It, Don’t Approach (Premiered by Zane Lowe on Apple Beats 1), Oh No and Murdahh (Featuring Big Skeez & Rico Pacino). Additionally picking up the features on Manu Crooks track for Best Years that has over 2.2M streams on Spotify, Featuring on C.A.C with Electronic Producer Kilter. His first release You Know It, caught the attention of legendary New York radio personality Ebro Darden, who proceeded to spin the heavy-hitting anthem on Beats1 radio. In addition to the global Beats1 spin, the West Sydney product also found himself amassing over a Million streams online off the back of just 7 releases.

He’s been a staple of Spotify playlists like A1 Hip Hop, The Drip and All Aussie Hip Hop. Being featured on Apple Music and Youtube Music. Having multiple video singles released via MTV Australia. 2019 was a massive year for Lil Spacely receiving the 43rd most played song of 2019 on FBI Radio, and getting two songs in this years count for Hottest 100 on Triple J. He finished the year off strong with supporting Dead Prez (USA), performing sold out shows in Sydney & Melbourne with Kilter.

On January 17th Lil Spacely will be releasing his follow up single to Murdahh called Still Trappin’ featuring Blacktown’s very own Elijah YO. Elijah YO is known for his tracks like Westside Flow (Remix) and more recently 3Deep / Hooks. Summer / Western Sydney flowing vibe of a track Still Trappin’ was produced by Korky Buchek. (Latest single Could Be U). Lil Spacely will be making waves around the east coast with some dates in support of his latest single with supports from some of the best established artists in the country this January/February 2020. 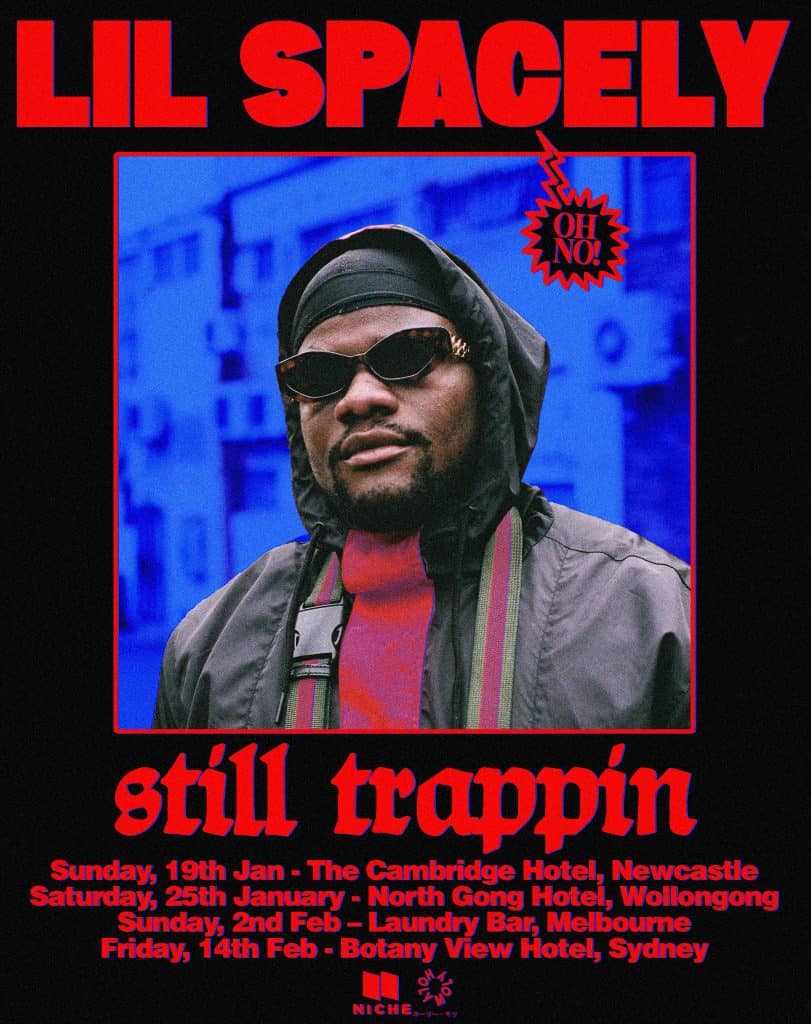