Self-proclaimed band-geek gone rogue Lola Scott is set to release her highly anticipated EP “¼ Life Crisis” including focus single “One Time (Last Night)” on Friday 14th May 2021. Writing melodies for those who long for freedom, Lola is taking a new direction in music, trading effervescent pop songs for nostalgic alternative styles that allow listeners to stand independent in a world of Scott’s creation.

“The ‘¼ Life Crisis’ EP is a biographical recount of events that happened in my life after getting out of a long term relationship, and moving back into a share-house full of benders,” said Lola “There have been a couple of short term flings in this time, that I cruised through for lyrical content, but mostly, life has been an abundance of budding friendships that I’ve found through co-writing.”

“My own quarter-life crisis has taught me that there aren’t many stable things in life, other than those ride or die friendships that feel like family. You can never please everyone, so I’ve learned to just treat people right, and enjoy the time you spend with your homies.”

The EP’s focus single “One Time (Last Night)” co-written by Joel Quartermain (Eskimo Joe, Meg Mac) and co-produced by Joel Quartermain, Oscar Sharah (Mel Blue) and Lola features a tale of what is a casual hookup from Lola’s perspective but perceived as something more from the other point of view. Accompanied by the powerful burst of Scott’s breathy vocals and upbeat production, the single encapsulates the energy of the entire EP.

“Maneuvering smoothly through casual relationships can be a minefield. Rarely will two people be on the same page, especially with the play it cool mentality of modern dating. This was the first track I wrote from the EP. I’d just come out of a long codependent relationship and was on the drunken rebound with my gal Lucia who was also newly single.”

“Jogging Shoes” another highlight track that captures the essence of Lola’s unique sound and style was co-written by dreamy pop artist and friend Abby Bella May and co-produced by Lukey G and Oscar Sharah, both members of Mel Blue.

“This track was written over a tea night with my friend Abby. We sat in my living room and vented some boy talk while I cradled my nylon baby. I found myself dating a once stranger who had moved into my house & wrote this petty track after the breakup. We’re still mates unless he reads this lol. I made a bunch of bad life decisions throughout this EP but they made for alright writing. I was a little heartbroken but I chose to mask that with some shitty remarks coated in sarcasm. It was a lot easier to say ‘fuck it I’m fine’ than dwell on our short-lived romance.”

Lola Scott is changing. Whether brought on by the fragility of 2020, a shift in artistic course, or something else entirely, it is utterly mesmerising to watch. Now, to demonstrate the creative encapsulation of her new direction is her hotly anticipated EP “¼ Life Crisis” including three of Lola’s most recent singles “The Eviction Song”, “4E Jobless” and “I Wanted To Call Her But I’m Tragic & She’s Overseas (8 Months)”.

Beginning to play guitar and write songs at the age of eight, Lola Scott was spending lunchtimes in the music rooms for the majority of her school life. This dedicated honing of her musical craft over the years eventually led to her attaining a Bachelor’s degree in guitar, and Scott subsequently began her career as a session musician playing in friends’ bands throughout University, even landing a European tour and various local tours.

Building the suspense for the EP Scott’s most recent single “I Wanted To Call Her But I’m Tragic & She’s Overseas (8 Months)”, a collab with Mel Blue, was featured on Spotify’s ‘Front Left’ playlist with over half a million followers, using Lola’s image as the playlist cover. Having landed a spot in triple j Unearthed ‘Top 5 Songs Of The Week’ and being awarded multiple radio spins across triple j, Unearthed, FBi and Radio Adelaide, the track is doing a sure job of raising excitement.

Since the launch of her solo project in 2018, Scott has delivered highly-praised singles with mind-blowing consistency, releasing three hook-laced singles in 2019 including “Crowded Conscience”, which saw spot plays on triple j, and “Cyclone Weather”, which was added to full rotation on tastemaker station FBi Radio in Sydney. Lola launched into 2020 stronger than ever, with fully charged pop track “Take Me

With the glow of her new found creative freedom, Lola Scott is proving herself to be an alt-pop powerhouse binding a truly original sound within the Sydney music scene. 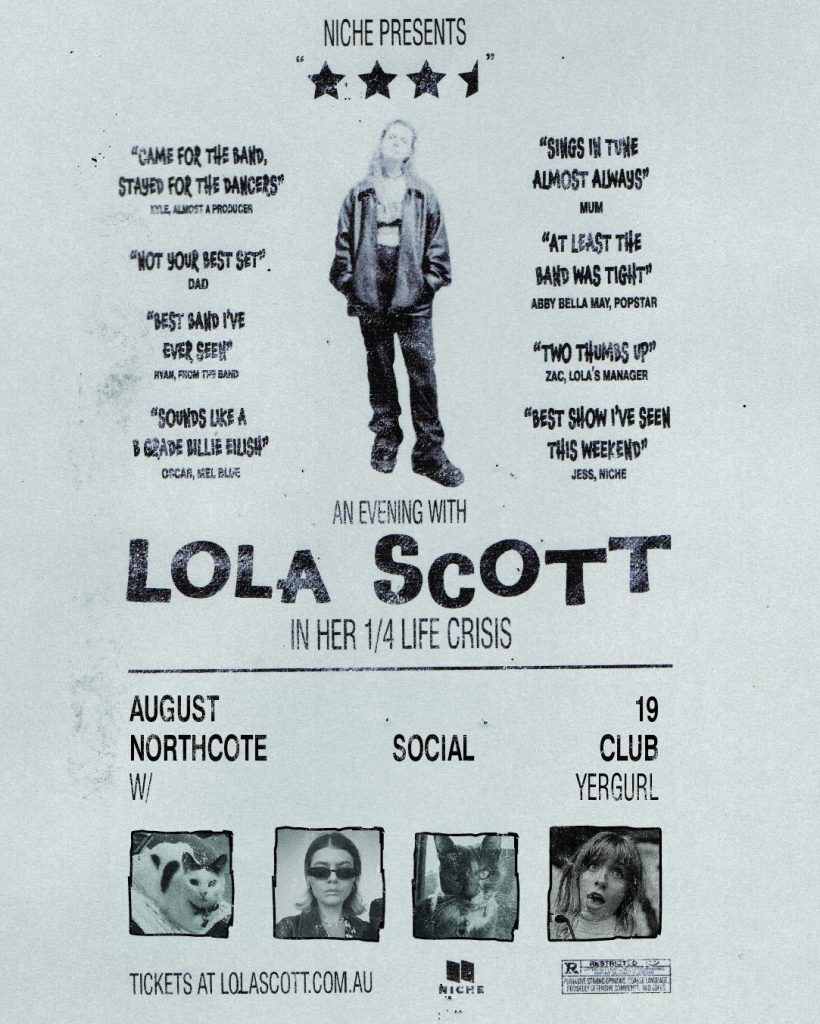