Having quickly turned heads with his ‘wonderfully slow burning slice of left-field house music’ (Pilerats) in 2017, Melbourne producer, songwriter and multi-instrumentalist LUBOKU has risen to prove himself time over as a master of spacey electronica – blending a mix of hypnotic old-school house and experimental club styles into “a truly mesmerising experience” (Stoney Roads).

Now, with the release of his debut solo EP “The Surface”, Luboku is setting out on his first ever solo tour, starting on the NSW Central Coast on February 1 before taking in Melbourne, Sydney and Newcastle. Following up on a HUGE year, 2018 saw Luboku play a slew of killer live slots in clubs and theatres supporting the likes of Willaris. K, What So Not and French producer, Petit Biscuit. Alongside a steady release cycle of singles including ‘Without You’ a six minute banger of brooding, colorful melodies and dancefloor-ready percussion, the versatile, vulnerable and futuristic dark-techno ode to connection and loss ‘None Of You’ and his uplifting, melancholic masterpiece ‘50 Days’ and debut solo EP “The Surface”.

The triple j Unearthed feature artist has climbed Spotify Australia’s ‘Viral 50’ and claimed a top spot in the Shazam Top 100 chart. Luboku’s singles have featured in Apple Music’s A-List Electronic and Best Of The Week playlists, and has been playlisted to Spotify’s New Music Friday AU&NZ, Topshelf Electronic, Indie Arrivals and Fresh Finds. Half a million streams in, there’s absolutely no signs of Luboku slowing down and will now treat the Southern East Coast to his electrifying live show this February. 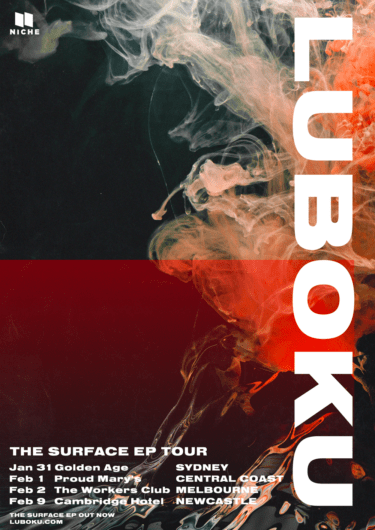