Taking over Sydney’s Metro Theatre on Saturday, March 24 before playing Brisbane, Melbourne and Perth, fans can expect full sets from both acts.

Local hip-hop favourite BARO currently rising through the ranks with single ‘Pretty’ will be support for all shows.

“The Water[s]” LP arrived a year later, a meditation on water as life’s truths it stands as Jenkins breakout project.

Propelled by viral smashes ‘So Devillish’, ‘Gold Soul Theory’ and ‘Herb Shuttles’, The Underachievers are making their way out of their Flatbush, New York home one rhyme at a time.

“Renaissance”, their current release explodes with feel-good energy with xxlmag describing it as an album that speaks to those more concerned with lyrical content, cementing their place as a reputable rap group. 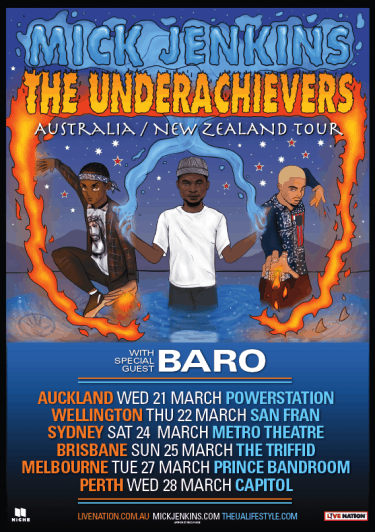