Just the sound of that word would send a flood of emotions into the mind of any self-respecting hip-hop head. Illmatic is arguably the most revered rap album in the genre’s history by one of the greatest MCs ever to touch the mic. And for the first time ever, Nas will perform Illmatic live in Australia from start to finish.

To celebrate the album’s twentieth anniversary, Nas has taken his sold out Illmatic tour all over the globe during the past year to enormous critical acclaim, and now it’s Australia’s turn. Off the back of his recently-announced headlining slot at Melbourne’s Sugar Mountain festival on January 24, where he’ll perform Illmatic in full, Nas will give fans in Brisbane, Sydney and Perth the same opportunity to experience the classic album live. Each show will be a one-night-only affair.

When Nas released Illmatic in 1994, it was off the back of tremendous hype he’d built through his debut appearance on Main Source’s ‘Live at the Barbeque’ and 1992’s ‘Halftime’, his debut solo release and Illmatic’s first single. The album was a relative commercial fizzer, debuting at #12 on the Billboard 200 and its five singles failing to gain much traction on radio. But it sent critics and hip-hop lovers into an absolute frenzy. The Source magazine, hip-hop’s bible in the ‘90s, gave Illmatic a five-mic review – an extremely prestigious achievement and unheard of for a debut release. In the years following, word steadily spread and a consensus was reached – the hip-hop world had a masterpiece on its hands.

“A classic album is supposed to change or define its time. Illmatic did both. No album better reflected the sound of New York, ‘94. The alembic of soul jazz samples, SP-1200s, broken nose breaks, and raw rap distilled the Henny, no chaser ideal of boom-bap. The loops rummage through their parent’s collection: Donald Byrd, Joe Chambers, Ahmad Jamal, Parliament, Michael Jackson. The styles and stories that formed him fuse into something that withstands outdated slang and popular taste: it is a story of a gifted writer born into squalor, trying to claw his way out of the trap.” – Pitchfork

The album has been the subject of books, academic studies and this year’s widely acclaimed Time is Illmatic documentary, which will be released in Australia in January to coincide with this historic tour.

On top of his full Illmatic performance, Nas will also treat the crowd to a selection of hits from his celebrated catalogue. Each show is a guaranteed sell-out. Don’t sleep (‘cause sleep is the cousin of death).

“The greatest rap album of all time.” – Complex

“Without even knowing it, Nas made the greatest rap album of all time.” – Billboard

“A classic album is supposed to change or define its time. Illmatic did both.” 10/10 – Pitchfork

“Still stands as one of rap’s crowning achievements” – Rolling Stone

“Illmatic is the best hip-hop record ever made” – Prefix

“The greatest album of all time” – PopMatters

“There’s little debate that Nas’s ’94 opus Illmatic is among the greatest rap albums ever made, if not the greatest albums of any genre.” – Fact Magazine

“It was, and is, untouchable – as perfect a piece of deep-in-its-own-head New York rap as we’re ever likely to hear.” – Stereogum 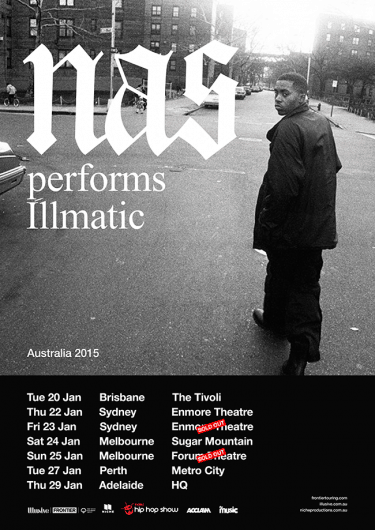