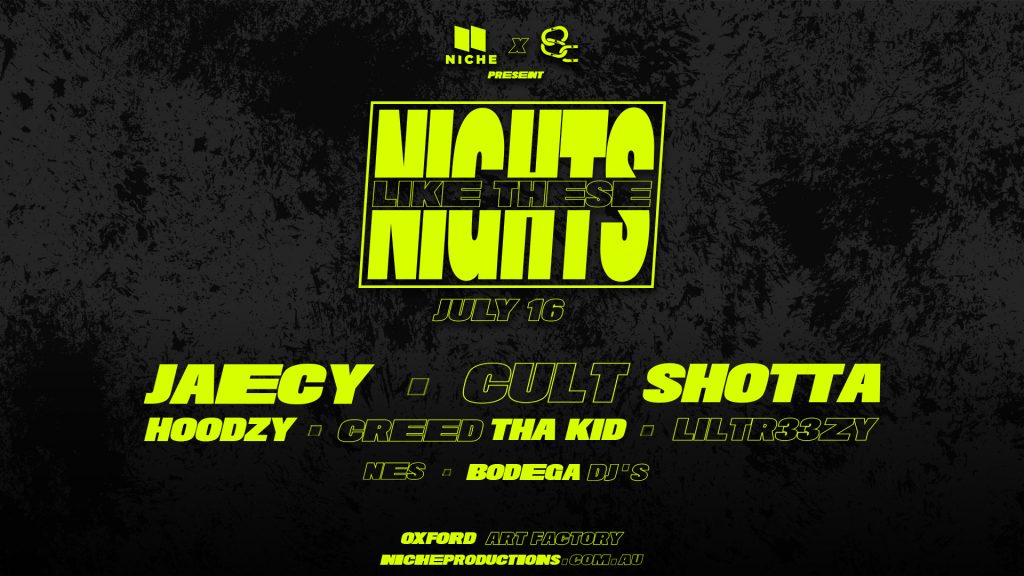 “Nights Like These”: the new initiative by Niche Productions as the booking and touring agency explores new creative endeavours around the Australian music industry. Niche has partnered with Sydney’s Bodega Collective to showcase five of Sydney’s fire-starter Hip Hop artists. Jaecy and Cult Shotta are set to co-headline the event, held in Darlinghurst’s Oxford Art Factory on the 16th of July. Supported by rising stars Creed Tha Kid, ­­­Lil Tr33zy and Hoodzy, “Nights Like These” is set for a blast off inauguration.

Inspired by Andy Warhol’s Factory in New York in the 1960’s, Oxford Art Factory, located in the heart of Sydney’s CBD, has been one of the premier showcase spaces in NSW for over 13 years. Throughout the last year, fans haven’t had the chance to see the progress that has been made by these artists, who due to NSW’s strict COVID measures haven’t been given the chance to perform and connect with their fans in the ways that they’ve become accustomed to in the past. Niche Productions and the Bodega Collective want to showcase this talent in a safe, inclusive, and diverse space that reflects the company’s, and the culture’s values.

After a standout single release in “What’s Good”, Jaecy has risen to the upper echelon of Australia’s Rap stars. Jaecy stands out from the crowd for his raw delivery, versatile energy and beyond-his-years maturity. The rapper/songwriter is set to Co-Headline “Nights Like These” alongside alternative Rap powerhouse, Cult Shotta. Featuring showcase sets from Creed Tha Kid and Hoodzy – with his melodic Rap style and refreshing creative direction, Creed Tha Kid will be supported by another Brisbane local, Hoodzy, performing her debut Sydney show since moving from QLD to NSW and, Lil Tr33zy – the Rapper, having previously collaborated with multi-platinum US Superstar A Boogie Wit Da Hoodie on her track “WOLF”. These acts, along-side Niche Productions and Bodega Collective are set to bring life to the “Night Like These” concept.