There are many binary flavours that Jason Chung aka Nosaj Thing explores on ‘Parallels’, his fourth full length release on Innovative Leisure. Masterfully dimensional, ‘Parallels’ represents the acclaimed Los Angeles-based electronic producer/composer/performer’s most diverse, vital work yet. To celebrate the release Nosaj Thing is heading to Australia to play 4 headline shows in Perth, Adelaide, Melbourne and Sydney.

The album’s compellingly elusive, uncategorizable sonics developed out of what he terms a personal and musical “identity crisis.” He goes on to say “my previous records reflected the anxiety of living inside my own imagination,” Chung explains. “For ‘Parallels’, I went outside of that: it’s all about trying new things, creating a new world”.

According to Chung, working with a group of collaborators on ‘Parallels’ that combined both longtime friends and new creative partners added “new energy which pushed me not to limit myself. Everything felt fresh and alive.” The title Parallels in fact evokes the intense, intimate duality Nosaj Thing and his collaborators share. Chung is known specifically for his innovative, unexpected musical pairings including collaborations with Kid Cudi, Kendrick Lamar and Chance the Rapper as well as working with Blonde Redhead’s vocalist Kazu Makino who’s voice appears throughout Parallels. 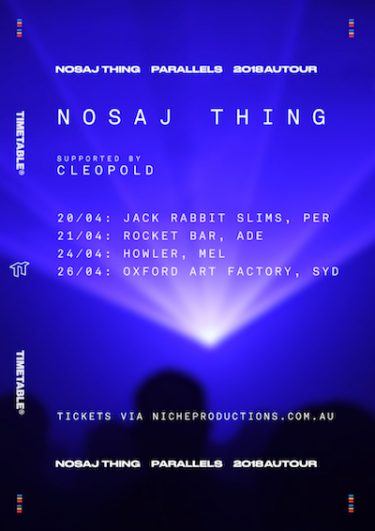