Melbourne MC REMI and musical collaborator Sensible J share their first single “For Good” featuring Sampa The Great, from their upcoming album Divas and Demons, due for release later this year. After the success of 2014’s Raw x Infinity, REMI returns with a Dilla inspired, soulful track that features Sampa’s raw and powerful poetry while her voice sits mesmerizingly alongside REMI’s inimitable take on hip hop. In celebration of the release, REMI is hitting the road around Australia with recent House of Beige signing, Man Made Mountain.

Raw x Infinity saw REMI nominated for Triple J’s Album of the Year, take out the Australian Music Prize as well as win an AIR award for Independent Hip Hop Album of the Year in 2015. Having performed their own sold-out shows, world class Australian and European festivals, REMI has also shared stages with Danny Brown, Vic Mensa, Joey Bada$$, De La Soul and was invited to perform Gorillaz tracks with Damon Albarn on each of his Australian tour shows. What stands out even more than their impeccable track record is REMI’s ability to entertain.

“REMI is a consummate performer. He’s impossibly slick and completely unafraid to shake what his mama gave him (seriously, this dude’s got moves). He knows how to whip the crowd into a frenzy. There’s nowhere for this young artist to go but up. Betting against REMI would be a fool’s move. He’s got the goods”. – themusic.com

After making waves across Australia & internationally in 2014 with their debut album Raw x Infinity, REMI returns with his new single as a teaser for their forthcoming LP due on House of Beige later this year. Get set for REMI to continue their ascent as they tour with Groovin The Moo throughout April and perform a national headline tour in May. 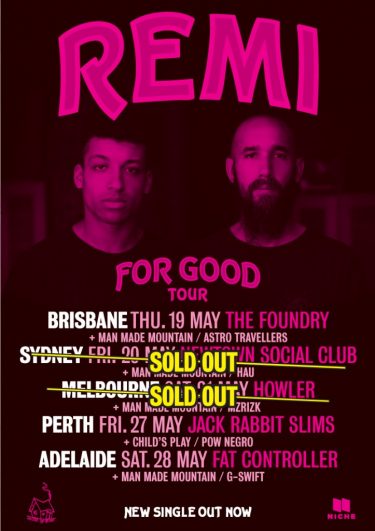