The frequent collaborators will head across the country throughout June and July, alternating set times each night before closing with a joint finale. Keeping fans on their toes are surprise guests in each city and hand-picked supports. Each night is set to be a celebration of music and community.

Last year, Remi Kolawole and collaborator Sensible J (collectively known as REMI) teamed up with Sampa The Great to release “For Good”, the first single off REMI’s sophomore album, Divas and Demons. The Dilla-inspired, soulful track featured Sampa’s raw and powerful poetry and vocals, beside REMI’s inimitable verses and Sensible J’s incredible production. Receiving international acclaim for both the track and video, “For Good” solidified both artist’s places in the hip-hop and soul spectrum.

Having spent much of 2016 writing, recording and performing, REMI saw their Divas & Demons album become one of the most talked about releases of the year, featuring alongside Sampa the Great some of Australia’s brightest hip-hop and soul artists including Simon Mavin (Hiatus Kaiyote), Jordan Rakei, Baro, Silent Jay, Tom Scott (Average Rap Band), Lorry (Hiatus Kaiyote), Nui Moon and Cazeaux O.S.L.O. (Man Made Mountain). Previous Australian Music Prize winners, the pair received nods from triple j and community radio, support from Rolling Stone and national press, and completed sold out shows across the country alongside festival appearances at Splendour in the Grass, Falls Festival and Field Day.

The rise of Sampa the Great has been nothing short of spectacular. A poet and singer-songwriter who expresses herself through song, poetry and visual art, Sampa sees music as a language of the soul, eclipsing borders and acting as an agent for positive change. In 2015, Sampa received phenomenal success with her debut release, The Great Mixtape. It featured the #1 Hype Machine hit “Blue Boss” that was picked up by BBC Radio 1’s Annie Mac and reached one million Spotify plays in two months, while follow-ups “Black Dignity” and her HERoes project were received with similar greatness. Live, Sampa has supported the likes of Kendrick Lamar, Thundercat and Hiatus Kaiyote, sold out her own shows and headlined festivals including Golden Plains, Sugar Mountain, Laneway and WOMAD.

Both REMI and Sampa The Great are heading to the UK in May ahead of their ‘Fire Sign‘ tour kicking off in June. REMI is due to play Brighton Festival via the invitation of curator Kate Tempest and Sampa the Great is set to play The Great Escape festival in Brighton.

The collaboration of REMI and Sampa The Great is sacred. Each in their own right has shaped Australian hip-hop in unique ways. Together, there’s no saying what heights they will reach and what unparalleled music they will make. 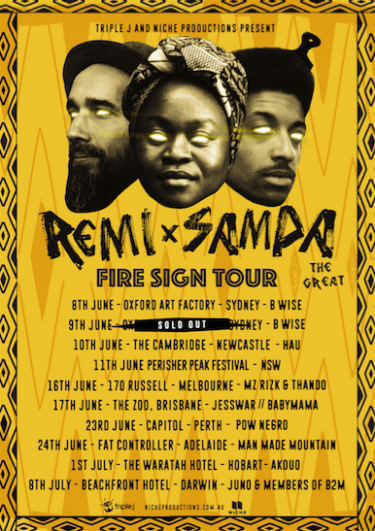