Reside formed in 2017 with the longstanding original lineup of vocalist Liam Guinane , guitarists Ariel Johnson and Will Eggleton , bassist Sale Brown and drummer Dylan Houston . Since their debut EP ‘ Closing Doors ‘ in late 2017, Reside have solidified themselves a place in the alternative music community and have managed to capture and engage a very dedicated fan base.

Reside stormed into 2019 and turned heads with sophomore EP ‘The Light That You Saw’, which made its way to the ears of hundreds of thousands of listeners, leading with the single ” In This Moment ” – which received high praise from triple j and was immediately added to Spotify playlists New Music Friday AU + NZ and Rock Out . ” Replace Me ” followed suit with adds to Spotify playlists New Punk Tracks , The Scene and Rock Out ., ultimately leading to a sold out EP launch show at Melbourne’s Cherry Bar .

Reside welcomed the year of 2020 atop the main stage at UNIFY Gathering after winning the triple j Unearthed opener competition, joining the line up alongside hardcore legends The Ghost Inside, metalcore heavyweights Architects and Australian favourites in Northlane , Polaris and more! Reside have also toured nationwide with emo sweethearts Eat Your Heart Out and Windwaker and secured support slots for the likes of Palaye Royale (US), Casey (UK), The Beautiful Monument, Bad/Love and Stuck Out and will join Canada’s Marianas Trench in 2021.

After a year of being in lockdown planning and working on new music, the new chapter for Reside begins here. Join them for their first headline show since ‘The Light That You Saw.’ 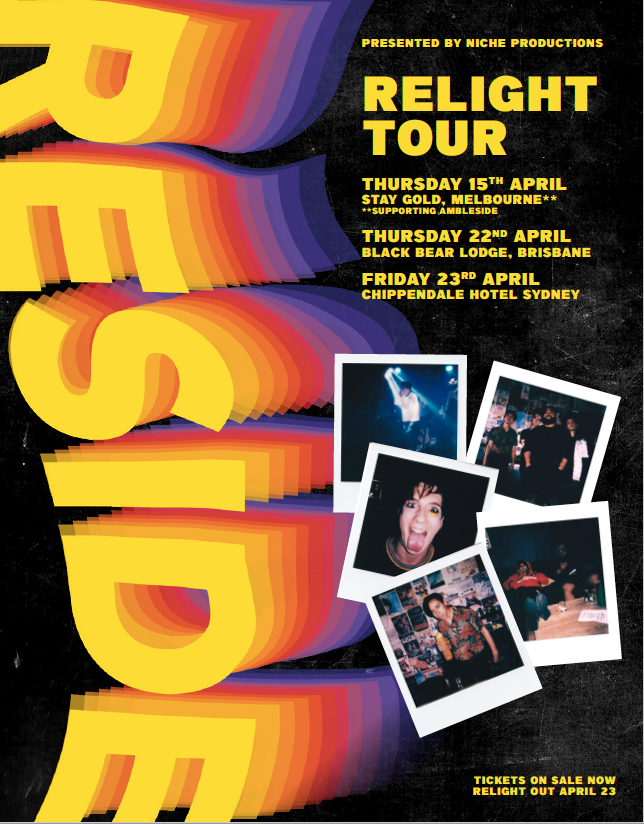