Today, ARIA-award winning poet and rapper, Sampa The Great announces An Afro Future, with live shows visiting Sydney, Melbourne and Brisbane throughout May and June, 2022.

Ahead of a new music chapter arriving soon, and after the postponement of last year’s inaugural and highly anticipated An Afro Future tour, it is with great pleasure that Sampa can now promise a spectacular run of rescheduled live performances for fans. For many, the tour marks the first opportunity to see Sampa in live format with her full band from Zambia, performing from her debut award-winning album, The Return, as well as new music.

Launching from Brisbane’s The Tivoli on Wednesday, May 25, Sampa will perform from her hugely applauded catalogue, before traveling to Sydney later that same week for a double run of headline shows at VIVID festival. On Friday, May 27 and Saturday, May 28, Sampa The Great will make her rescheduled Sydney Opera House debut, headlining both nights in the Joan Sutherland Theatre. The following week, on Wednesday, June 1 and Thursday, June 2, Sampa performs back to back evenings at Melbourne’s iconic The Forum for RISING. Joining Sampa at all venues will be special guests, Zimbabwe-born, London-raised, Australian-based singer KYE, Sampa’s younger sister and rising neo-soul star Mwanjé, and the sounds of expert tastemaker, C.Frim. Together, the tour makes for a sublime reintroduction to Sampa’s live vision in An Afro Future.

Amid relocating to South Africa throughout the pandemic, Sampa The Great has spent much of the past two years writing and recording. In 2020, Sampa The Great took home three ARIA Awards for her debut album The Return, including Best Independent Release, Best Female Artist and Best Hip Hop Releasebefore executing a thrilling live performance filmed from a rooftop in Botswana. Later that same month, the Music Victoria Awards saw Sampa take home four wins, including Best Album, Best Solo Artist, Best Soul, Funk, Gospel or R&B Album and Best Song, to cap off a year that included becoming the first solo artist and female musician to win Best Live Act at the National Live Music Awards and BET Amplified’s first-ever global artist. As a highly applauded live performer, Sampa has entertained audiences across the globe with appearances at festivals like Glastonbury, Splendour in the Grass and Laneway, alongside virtual sets for AFROPUNK, Black August and the Roots Picnic, as well as support slots for artists including Kendrick Lamar and Ms Lauryn Hill. In two weeks time, Sampa The Great will deliver on her 2021 invitation, and perform for the first time at Coachella 2022.

In 2019, Sampa took home Best Hip Hop Release for “Final Form” at the 2019 ARIA Awards, alongside multiple other wins at the annual J Awards, including Video of the Year and Double J’s Artist of the Year, Best Hip Hop Act at the Music Victoria Music Awards and broke industry records by winning the prestigious Australian Music Prize twice in her career. The Return LP received praise from the likes of The Guardian, NPR, Pitchfork, The FADER, Billboard, OkayAfrica and countless others. Sampa then re-released The Return track, “Time’s Up” with new verses from New York rapper Junglepussy, collaborated with the likes of The Avalanches, Denzel Curry & Tricky, as well as featured on Michelle Obama’s esteemed playlist.

As Sampa The Great prepares to unveil new music imminently, and press play on a paused history-in-the-making moment, do not miss Sampa’s run of thrilling live performances in Australia for An Afro Future 2022 with a full band. 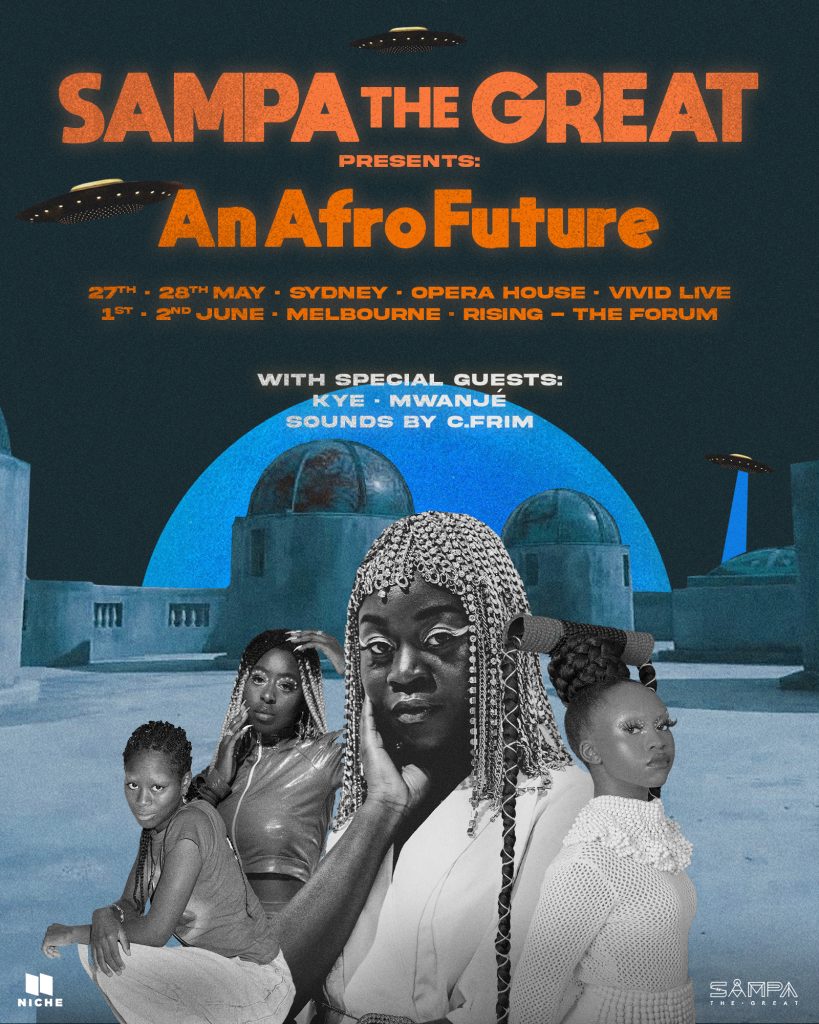