Following the success of their upcoming shows in Brisbane and Fremantle, Niche Productions are excited announce the addition of two new headline shows in Melbourne and Sydney this March, the first since their SOLD OUT tour in 2015. Tickets go on sale this Friday 17thFebruary and are guaranteed to go quickly so make sure you don’t miss out!

Since the band emerged in 2008, they have traversed tens of thousands of miles throughout Australasia, Europe and The USA, following the success of their quadruple platinum selling self-titled debut ‘SIX60’, which went on to pick up 6 New Zealand Music Awards.

This was followed up in 2015 with their much anticipated second album which was again certified platinum and spent over 6 months in the Top 15 of the album charts which saw them signed to iconic record label Capitol Records.

Careening between roots, soul, pop, dubstep, R&B and drum & bass; the band’s unorthodox marrying and mish-mashery between unlikely genres is something fans have come to know & love, and culminates in their explosive live show. 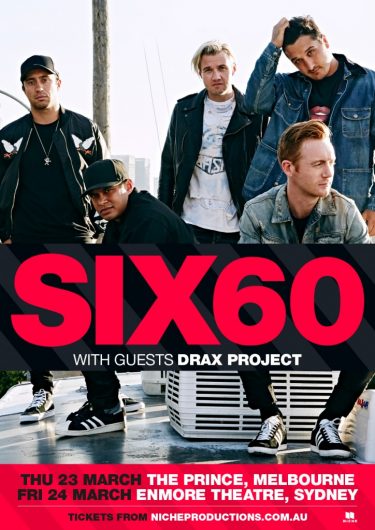