Sleepmakeswaves These Are Not Your Dreams Tour

Australian instrumental post-rockers sleepmakeswaves have announced their ‘these are not your dreams’ Australian tour will be rescheduled for September/October 2022, due to the ongoing COVID-19 pandemic.

The band released a statement to fans, saying:

You come to me, on the day my daughter is to be married, and you ask me to postpone your tour?

Friends, we are announcing today that our Australian headline tour is being pushed back by several months to the greener pastures of September/October.

We made this decision a few weeks ago and wanted to lock in the new dates and supports before we made the announcement.

If you’re someone who purchased a ticket for this show last year, or even in 2020, this is probably starting to feel like an endless cycle of postponements and disappointments from sleepmakeswaves.

We can only apologise and hope that you can understand this was necessary due to a whirlpool of circumstances, some COVID-related – we don’t take your support for granted and we appreciate your patience.

In the meantime, and on a happier note, we have some other announcements:

– Our next album will be recorded in the middle of the year. We have been working on this since 2020 and are seriously thrilled to share the new material with you. If you’ve been listening since the beginning, or if you’ve jumped on this chaotic broken down rusted post prog rock bus more recently, thanks. And press the bell if you’d like to stop and get off, that’s ok too.

– We have the mighty Closure in Moscow and our long term sweethearts Tangled Thoughts of Leaving opening for us on most dates this tour. These guys are going to melt faces and share in the chaotic spirit of rock.

– The Live at the Metro vinyls have been made and are on their way to Australia now.

Our debut album quietly had its tenth birthday last year. At some point before the vinyl production market imploded we were going to release a deluxe edition of ASWDE for its 10 year anniversary. This has been designed by James Stuart and looks cool as hell, and should be available for pre-order soon for those that want to indulge in the nostalgia of 2011-era aussie post rock (which we hope is all of you)

We miss you, we love you, we will see you soon.

Once sleepmakeswaves (finally) hit the road again in 2022, the ‘these are not your dreams’ shows will feature new music from their EP trilogy of the same name.

The new record, titled ‘these are not your dreams’ was released as a full length record in 2020, debuting at #25 on the ARIA Chart and #1 on the 100% Independent Chart.

Rather than following a conventional release pattern, new songs were released as a series of 3 Eps: ‘No Safe Place’ , ‘Out of Hours’ and ‘Not an Exit’. 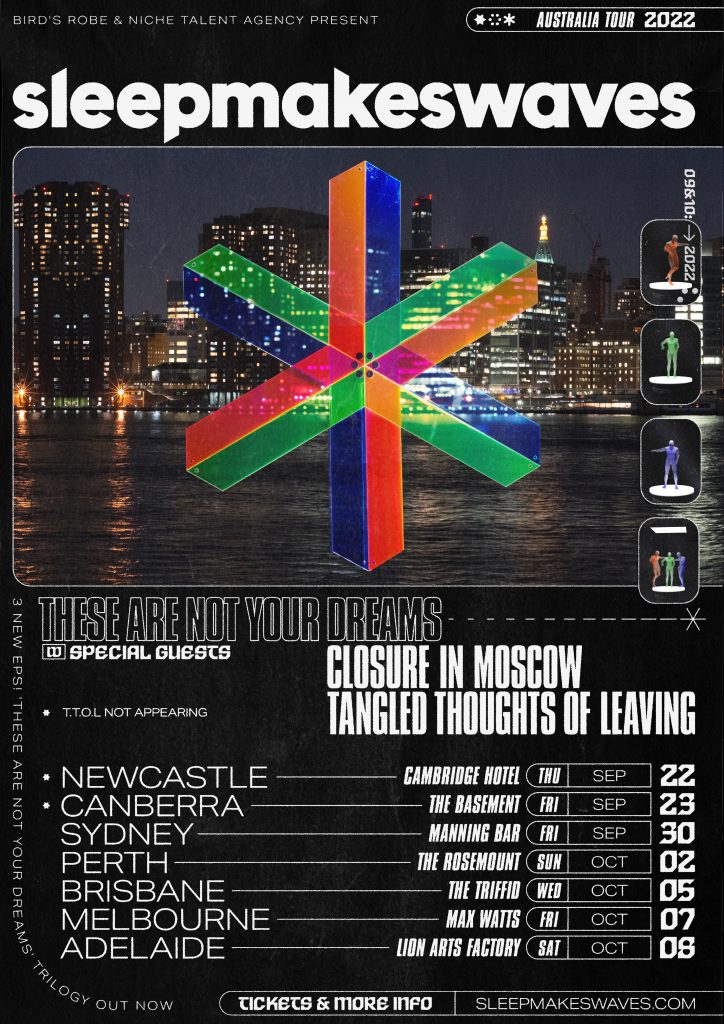