With a sound that is equal parts raw and emotive, captivating Sydney songstress Thandi Phoenix, is set to carve a path for herself as one of Australia’s most promising female electronic/RnB artists.

Thandi’s first record for 2016 ‘Tell Me Where The Lovers Have Gone’has been received tremendously since its release earlier this month, highlighted by its No.1 on the AU Viral Spotify Chart and being added to full rotation this week by Triple J. Off the back of her success in 2015 and this single, Thandi has penned a deal with the UK’s Island Records, which will see her spend an extended time period there recording her debut EP.

Her recent tour with UK powerhouse Rudimental solidified her as one of the strongest emerging live artists in the country, holding more than her own in stadium sized venues around the nation. To change it up Thandi has announced her first headline show of the year in the small intimate venue of Sydney’s The Soda Factory. This Free event will be taking place on June 30 with support from FBI/Triple J DJ, Shantan Wantan Ichiban. 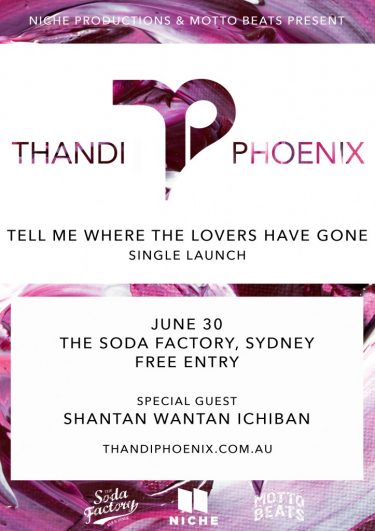