The Underachievers “The Forevermore Express” Tour 2016

Brooklyn hip-hop duo THE UNDERACHIEVERS today announced they will be returning to Australia and New Zealand for headline shows this April.

Born in Brooklyn, raised in Flatbush – Issa Dash and AK met in 2007 and burst into the scene in 2012 with their debut mix tape Indigoismwhich was highly praised by major hip-hop critics.

As members of the Beast Coast movement (which includes Joey Bada$$ and his Pro Era crew), The Underachievers are part of the new wave of influential rappers coming out of New York.

Revealing a raw energy that feels almost reminiscent of 90s hip hop, The Underachievers have shaken up the game with a refreshing new voice, bringing plenty of psychedelia and heightened lyricism into the mix. Their most recent sophomore album Evermore – The Art of Dualityportrays a mature and auto-biographical manifesto of The Underachiever’s lifestyle past and present.

Having toured with the likes of Joey Bada$$ and Kendrick Lamar, last year the duo embarked on a sold out headline tour across North America and Europe.

Following the recent announcement that their next anticipated mix tape project Lord of Flatbush 2 will be released in early 2016, the duo is now gearing up for the second leg of The Forevermore Express Tourthroughout Europe, New Zealand and Australia. 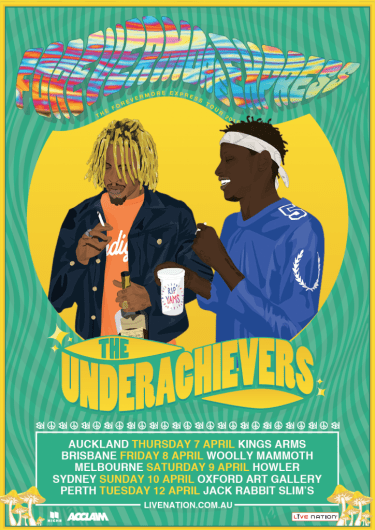