After their richly-textured second album Can’t Buy The Mood received praise all round when it was released in August, today Tora announce the release of a deluxe album with added B-Sides and carefully curated remixes. The deluxe album will be released on Friday 24 January 2020 and will be supported by a national tour taking in capital cities. They start this 6 – date run at Sydney’s iconic Oxford Art Factory on January 30, then onto Beach Hotel in Byron Bay on January 31. The band hit up Launceston for Party In The Paddock on February 7, followed by The Foundry in Brisbane on February 13 and Sol Bar in Maroochydore on February 15. The final show will be at The Corner Hotel in Melbourne on February 20.

These will be the last shows at home in Australia for some time, as the band have also announced plans to take the album over to South America, Canada, the United Kingdom and Europe, for extensive touring in 2020, with plenty more live dates to announce.

The original Can’t Buy The Mood album was primarily made in the Byron area, though the band also ventured into iconic studio spaces in LA, London and Amsterdam to work on the album. Largely written and produced by the band themselves, they also mixed and mastered all tracks, and did all the design and artwork, shared in the art direction of the music videos, completing an artistic vision which was key to the holistic experience of the album. With field recordings once again a key feature, the album is 13 tracks full of lush grooves and intricate moments.

Since release, tracks from their much-lauded debut album Take A Rest have received support from respected members of the international music community. Following a coveted album packet spot on triple j and high rotation for single ‘Another Case’, both Sir Elton John (Beats 1) and Annie Mac (BBC Radio 1) spun tracks on their radio programs and they’ve now clocked nearly 150 million streams globally – a massive achievement. Tora toured nationally and around the UK/Europe with over 40 album tour shows and sold out sets in Melbourne, Paris and London. They supported Oh Wonder nationally and even found an adoring fan in Resident Evil and Fifth Element star Milla Jovovich. All of this on top of previous spots at Glastonbury, Splendour in the Grass, Reeperbahn (DE), The Great Escape (UK), Best Kept Secret (NL) and over 70 more festival appearances across the globe. It’s been a size-able couple of years for these four Byron Bay locals. 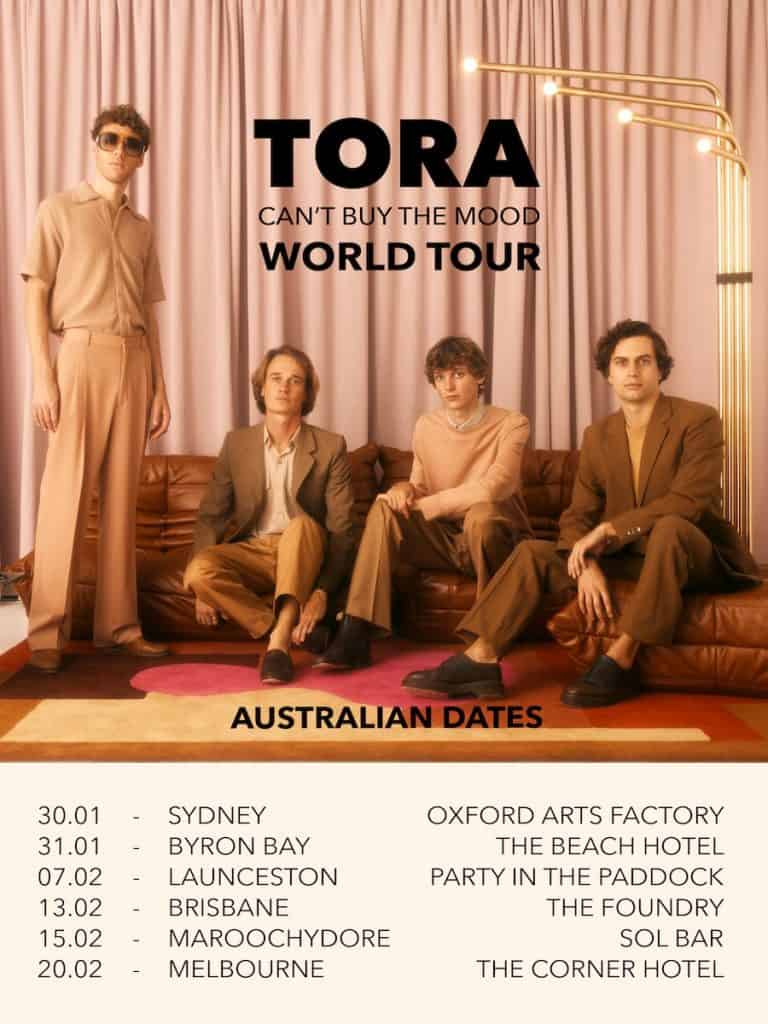