With the release of his highly anticipated sophomore album imminent, prolific singer, rapper and producer TRAVIS SCOTT will perform two headline Australian shows, along with his previously announced appearances at Listen Out.

Testament to Scott’s acclaim, his Auckland date sold out within hours of going on sale last month.

Born and raised in Texas, Travis Scott (real name Jacques Webster) started making beats at sixteen, before dropping out of college and moving to Los Angeles to pursue his music career in 2011. The following year, at just twenty years of age, Scott struck a record deal with Epic Records and signed on to be an in-house producer for Kanye West’s G.O.O.D. Music soon after.

With writing credits ranging from Rihanna’s “Bitch Better Have My Money” and Madonna’s “Illuminati” to Drake’s “Company” and Big Sean’s “First Quarter Freestyle”, Scott also remains one of music’s most in-demand producers. From his work on Kanye West’s Yeezus to Jay Z’s Magna Carter Holy Grail, the Texan’s flair and ingenuity is omnipresent.

Don’t miss your chance to take in one of hip-hop’s most prodigious young voices as Travis Scott brings his extraordinary live show to Australia. 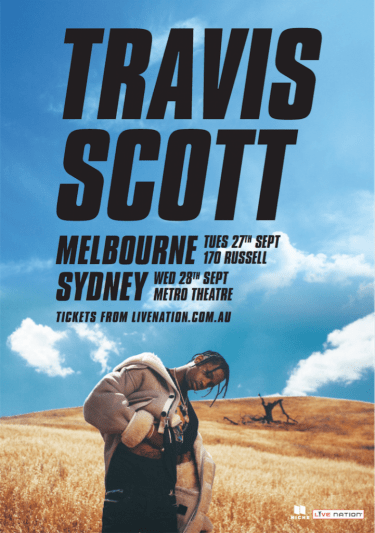