It seemed like the YMCMB empire was already at the top of the game and blessed enough with its rappers-turned-pop-culture icons: Nicki Minaj, Drake and Lil Wayne. Then along comes Tyga, the next undeniable start to emerge from the camp. Tyga is undoubtedly one of 2012’s hottest young rappers with a string of hits under his belt including “Rack City”, “Faded” and “Make It Nasty”. The LA-based artist signed to Lil Wayne’s Young Money imprint, who joins Nicki Minaj on her upcoming Australian Tour, will be performing two headline solo shows on Saturday 1st December in Sydney, and Friday 7th December in Melbourne.

Tyga, an acronym for Thank You God Always, grew up studying the work of Eminem, Cash Money Records, Nas and 2Pac among others. The young rapper practiced reciting rhymes and honing his craft and eventually started to record his own mix CD’s. About five years ago, Tyga earned a famous fan in Travie McCoy from Gym Class Heroes, when they met at a Los Angeles shoe store. Impressed by Tyga’s work, McCoy took the aspiring rapper on tour with his group. While touring, Tyga released his “No Introduction” album and met Lil Wayne. Wayne was so impressed with the artist he flew him out so they could make some music. While soaking up Wayne’s incredible work ethic, Tyga started developing his public persona as a phenomenally gifted lyricist who could make credible hits.

Stand out performances on Young Money’s We Are Young Money album, notably “Bedrock” and “Roger That”, Chris Brown’s #1 hit “Deuces” and a multitude of hyped mixtapes set the stage for Tyga’s YMCMB debut “Careless World: Rise of the Last King” released in February 2012. The album has spawned a multitude of hits including “Rack City”, “Faded” featuring Lil Wayne, “Make It Nasty”, and “Still Got It “ featuring Drake. 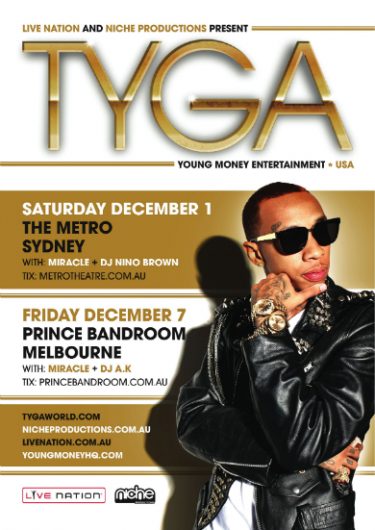