Fresh from the Eternal Grey Tour in the USA, $UICIDEBOY$ have announced their debut tour of Australia and New Zealand, kicking off this May with a run of shows in Sydney, Brisbane, Melbourne and Auckland.

Growing up together Ruby and $lick shared very different tastes in music; Ruby taking lessons from Minor Threat, Leftover Crack and The Mists, while $lick (aka Suicide Christ) pursed the art of turntablism, while honing his skills as a songwriter. Worlds collided as the New Orleans rap duo joined their creative forces in 2014 to form the juggernaut that is $UICIDBOY$.

$UICIDBOY$ then set about claiming the crown of ‘hardest working two-piece in the game’. When they aren’t writing, recording and touring, they are taking care of their own beat production, sound engineering, video production, art and merchandise design. Hard work and talent saw them swiftly noticed by G59 Records who signed them to get to work releasing the ambitious 2016 ten-part album series, Kill Your$elf, to the praise of the hip-hop underworld.

Back from the road with SXSW and a slew of international shows under their belt, the boys aren’t messing around, recording close to 30 EP’s and albums in only 2 years. Their 29th release, Radical $uicide arrived in July 2016 and quickly gained attention peaking at number 17 on the Billboard Rap Charts.

Don’t miss your chance to catch the future of hip-hop and trap music live and in the flesh this May.

THE STUDIO, AUCKLAND – TUESDAY MAY 9 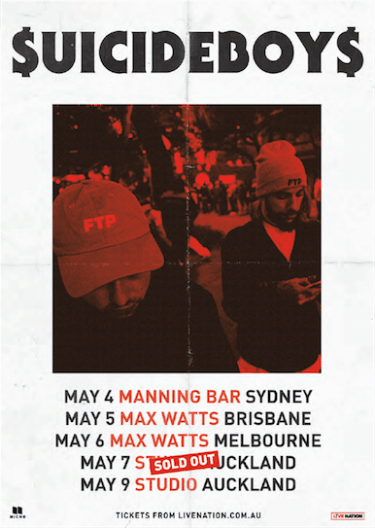