Making his debut trip to Australia, prodigious American rapper VINCE STAPLES has locked in two headline club shows in Melbourne and Sydney this February, in addition to the previously announced appearances at Laneway Festival 2016.

Vince Staples has emerged as one of rap’s preeminent stars. Since bursting into the spotlight with his Shyne Coldchain Vol. 1 mixtape in 2011, Staples has paired with Mac Miller for the revered Stolen Youthmixtape, undertaken extensive tours and collaborations with Earl Sweatshirt and Schoolboy Q, and signed with Def Jam – hip-hop’s most formidable label. Following up his acclaimed Hell Can Wait EP, in June 2015 Staples dropped his extraordinary double LP, Summertime ’06.

From the beginning of the record, Staples expertly conjures tales of his adolescence: delving headlong into the same wild, coming-of-age time depicted on Hell Can Wait, his celebrated 2014 EP. “That’s the prequel to what we’re speaking about on this album,” he says, “the point where we kind of had to grow up and fend for ourselves.”

On Hell Can Wait and his revered mixtapes, Vince Staples delivered a masterful blend of observational and first-person rap, alternating between detachment and honesty to great effect. With Summertime ’06, he takes listeners to scenes from his youth with unwavering focus, arranging a record reminiscent of Nas’ Illmatic or, more recently, Kendrick Lamar’s Good Kid, M.A.A.D. City, in its immediacy.

Celebrated by the likes of Pitchfork, XXL, Complex and The A.V. Club, Vince Staples remains one of music’s most thrilling and innovative young voices. 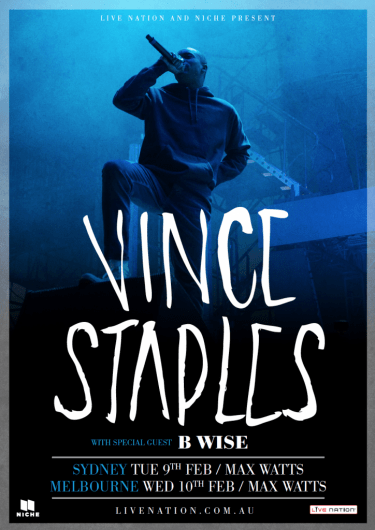