Sydney-based funk, soul and R&B act Winston Surfshirt today share their latest single, “Smile”, paired with the announcement of their second studio album, Apple Crumble, set for release this November. The six-piece celebrate the news with a fresh set of regional tour dates where they will debut their new material live across Australia this summer, alongside announcing the ROW international label signing to Infectious (UK)/BMG.

On the new partnership, Heath Johns and Josh Kellett say:
“BMG is proud to partner with our friends at Sweat It Out and Astral People to take Apple Crumble to the world. Key BMG execs from the UK, US and Europe are genuine believers in this record and already spreading the Winston gospel around the globe.” – Heath Johns, Managing Director, BMG Australia.

“We are beyond stoked to welcome BMG’s local and international teams to the Sweat & Winston fam. With some incredible labels like Infectious & Vagrant under their wing, we can’t wait to get started in working together via this new partnership and getting what Winston has been baking out to the world.” – Josh Kellett, General Manager, Sweat It Out.

Premiered on triple j’s Good Nights, “Smile” enlists brass hooks folded with shimmying beats, enhanced by Winston’s unmistakable cocktail of sultry R&B and soul-driven vocals. More slowed-down in approach than the disco movement of recent track “Make A Move”, today’s release ties a bow on the signature mood their loyal fans crave, and is certain to crack grins and stir visions of summertime in listeners everywhere. Funk-dipped grooves and catchy rhythms point to smiling words of love, as the esteemed act get set to embark on the next round of their musical story.

Winston says of the single:“I’ve been with the same woman for 14 years and she has the most contagious smile. I think I was always meant to write this song…”

Today’s new music and album announcement is coupled with a regional summer tour for loyal fans to get around. The eight-date leg kicks off at Langhorne Creek’s Handpicked Festival on November 9 before heading to Byron Bay’s Beach Hotel on November 15. The band next arrive at Maroochydore’s Sol Bar on November 16, followed by Spilt Milk Canberra on November 23, a Uni Bar takeover in Hobart on November 29 and a return to Spilt Milk Ballarat on November 30. Wrapping up, Bunbury’s Prince of Wales receives a dose of new music on December 6, before a final show ignites Margaret River’s Settlers Tavern on December 7.

Having developed a cult following for their smooth style and raucous live shows, the band’s unique blend of funk, soul and hip-hop originally emerged as the solo project of singer/rapper/producer Winston Surfshirt, before organically adopting other local artists and snowballing into what is now a musical collective filling each stage they grace to the brim.

From a sell-out debut national Sponge Cake tour in 2017, to festival billings at Splendour In The Grass, Spilt Milk, Falls Festival, Field Day and sold-out British & European shows, Winston Surfshirt continue to sell out crowds at home and abroad. Now with an Apple Crumble in the oven, be sure to follow the second chapter of Winston Surfshirt closely. 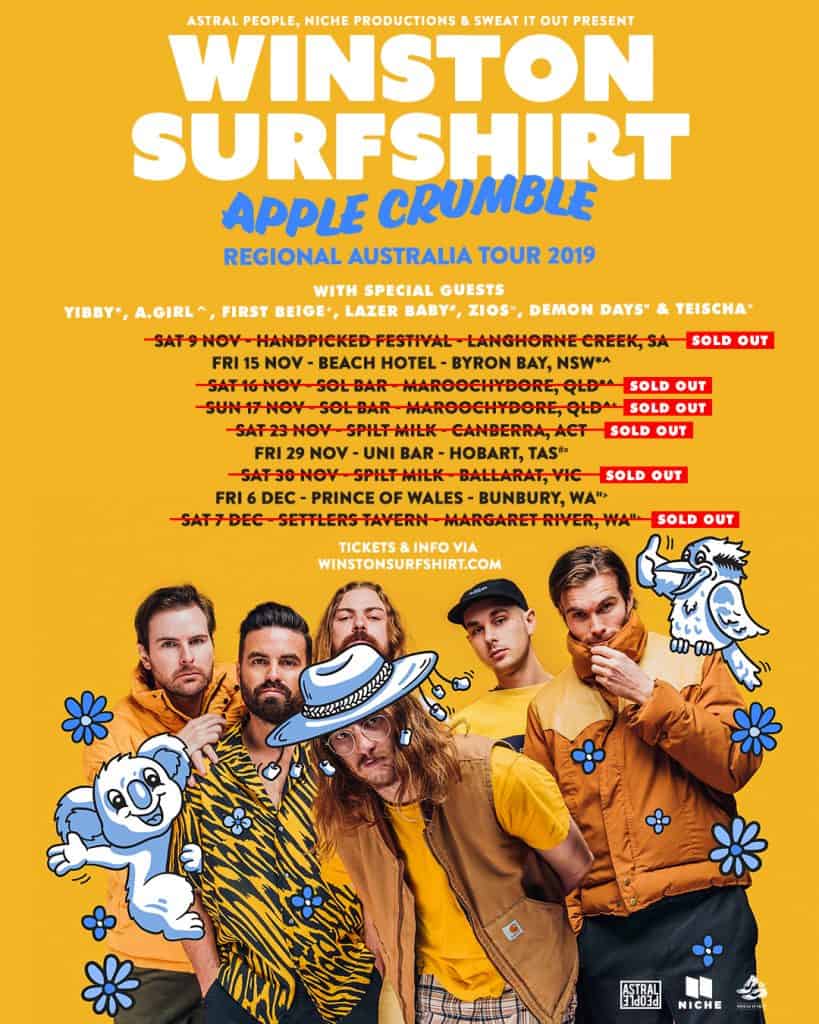